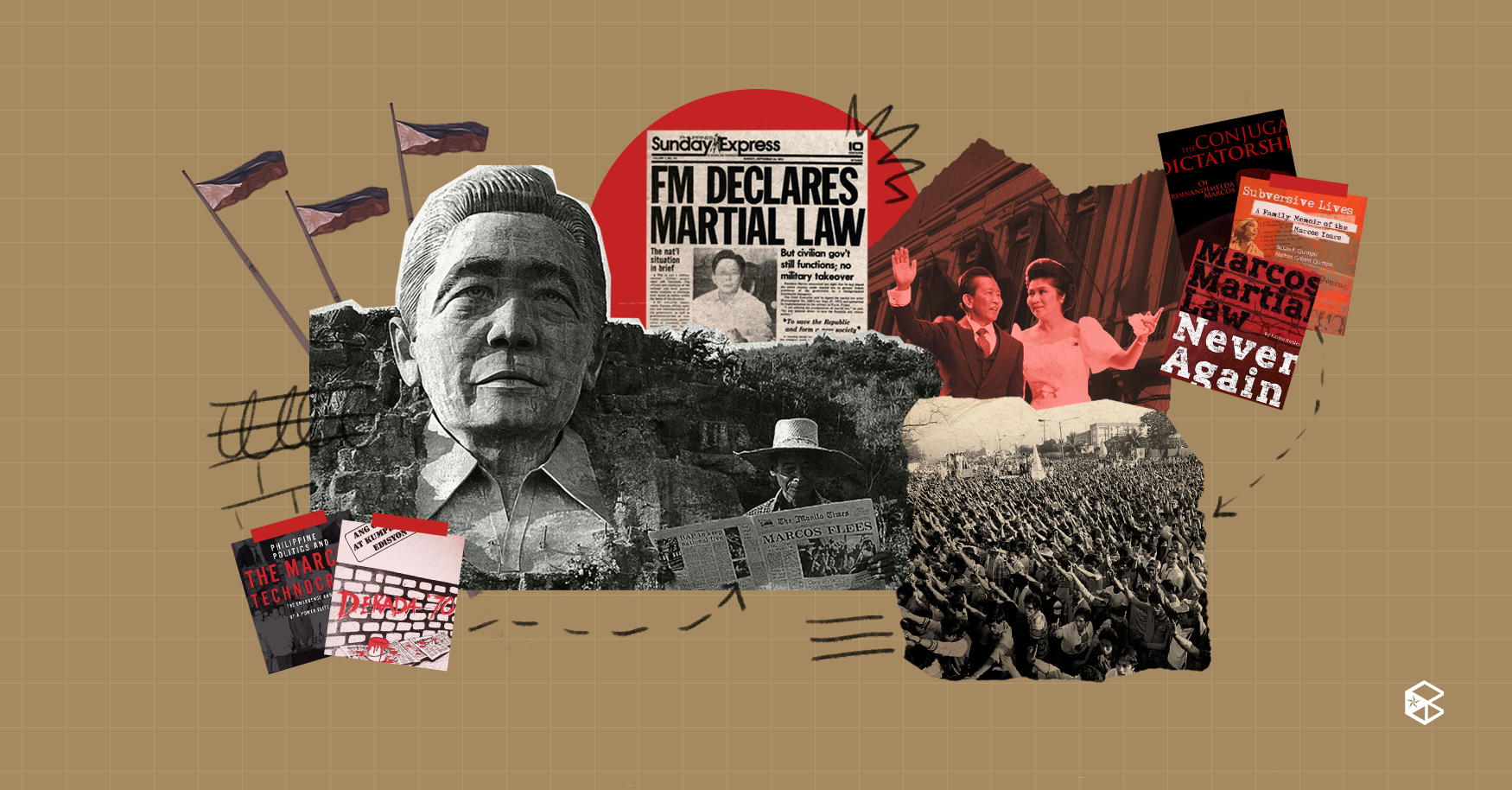 With Philippine history facing the threat of being rewritten, turn to these five books about Martial Law to preserve the memory of its victims and survivors alike.

After the release of the COMELEC’s partial and unofficial election results, the Philippines was rocked with mixed reactions towards the domination of Ferdinand “Bongbong” Marcos Jr., the son of late dictator Ferdinand Marcos Sr. The latter was infamous for his declaration of Martial Law, an era wherein innocent civilians and activists suddenly disappeared or resurfaced dead. However, their memories are immortalized in various pieces of media and literature, such as these succeeding books. Their existence, as well as our insistence on seeking justice for all the Martial Law victims, echo our drive to never forget.

Published in 1983, later spawning a film in 2002, Dekada ‘70 tells the experiences of a middle class family caught in the events during the rise and fall of the Marcos government. The book is centered around Amanda Bartolome, a mother of five sons. The main conflict arises when her eldest, Jules, decides to join the New People’s Army as an act of defiance.

Bautista, having a firsthand experience of the Martial Law era, frames the story in a riveting light—showing the struggle of a mother protecting her children, all the while attempting to survive the political dynamics surrounding her

You can find this book here.

The Conjugal Dictatorship of Ferdinand and Imelda Marcos by Primitivo Mijares

The book, first published in 1976, chronicles the accounts of an insider to the Marcos regime. Mijares was Marcos’ right-hand and press secretary, whose narrative was essential in getting a glimpse of the inner workings of the administration. The term “conjugal dictatorship” alludes to the shared power of Ferdinand and Imelda Marcos of the country.

Presently, there are still attempts to discredit some of the attempts written in the book. Mijares was declared dead years after the book’s publication. Consequentially, his youngest son, Luis Manuel, was abducted and murdered at the age of sixteen.

You can read this online for free.

Comprehensive and digestible, this book that was published in 2019 lays the foundation for one’s understanding of what happened during the Marcos’ regime.

There is a brief biography of Marcos Sr. and his rise to power, and includes an outline entitled, “Marcos’ plan to grab power.” Robles enumerates in seven points how Marcos gained power, the third point being “Undermine the Philippine public’s faith in democracy.” Moreover, the book covers the account of Primitivo Mijares who faced the consequences of publishing his book “The Conjugal Dictatorship of Imelda and Ferdinand Marcos.”

Robles also explains the dangers posed to Philippine democracy at the time and how the Communist threat was dealt with under Marcos’ rule.

The book can be found here.

Philippine Politics and the Marcos Technocrats: The Emergence and Evolution of a Power Elite by Teresa S. Encarnacion Tadem

A technocracy is a government made up of individuals who were chosen by higher authorities as policymakers or public officials based on their technical skills in a specific field.

In this book, Tadem analyzes the phenomenon of these technocrats’ rise to power in the country during Marcos’ two terms based on their skills instead of their political and economic backgrounds. The former president deemed such technocrats to be valuable in managing the country’s affairs related to multilateral lending institutions (i.e. the World Bank), local businesses, and multinational corporations during the early period of his presidency. Tadem delves into the creation of a new branch of Philippine elites as they became key actors in the country’s economic policy-making process at the hands of the man who appointed them.

You can purchase an online copy here.

Published in 2012, this memoir recounts the experiences of the two authors and their eight siblings during the Marcos regime, with seven out of the 10 Quimpo children becoming activists.

A stark feature of this collection of narrative is that it focuses on the effects of the Martial Law on the Filipino family, delineating the old and new views of their generations. This is especially reflected in how the children took part in radical student movements of the time. It contains the siblings’ first-hand accounts as they lived and fought amidst the conflicts in their country as well as the conflict between them and their parents.

You can order a copy here.

Books such as these are all that one can have in a period when academic and non-fictional works  are under the threat of revisionism. In the larger picture, it is not the written works that face the greatest danger—it is the reader.

If the truth in these books are not accepted by the mind, one’s critical thinking and social awareness are at stake. Historical falsification is very much available for powerful figures to misuse, therefore the knowing reader must stand by the truth and keep the memory of Martial Law victims and survivors alive in troubling times.