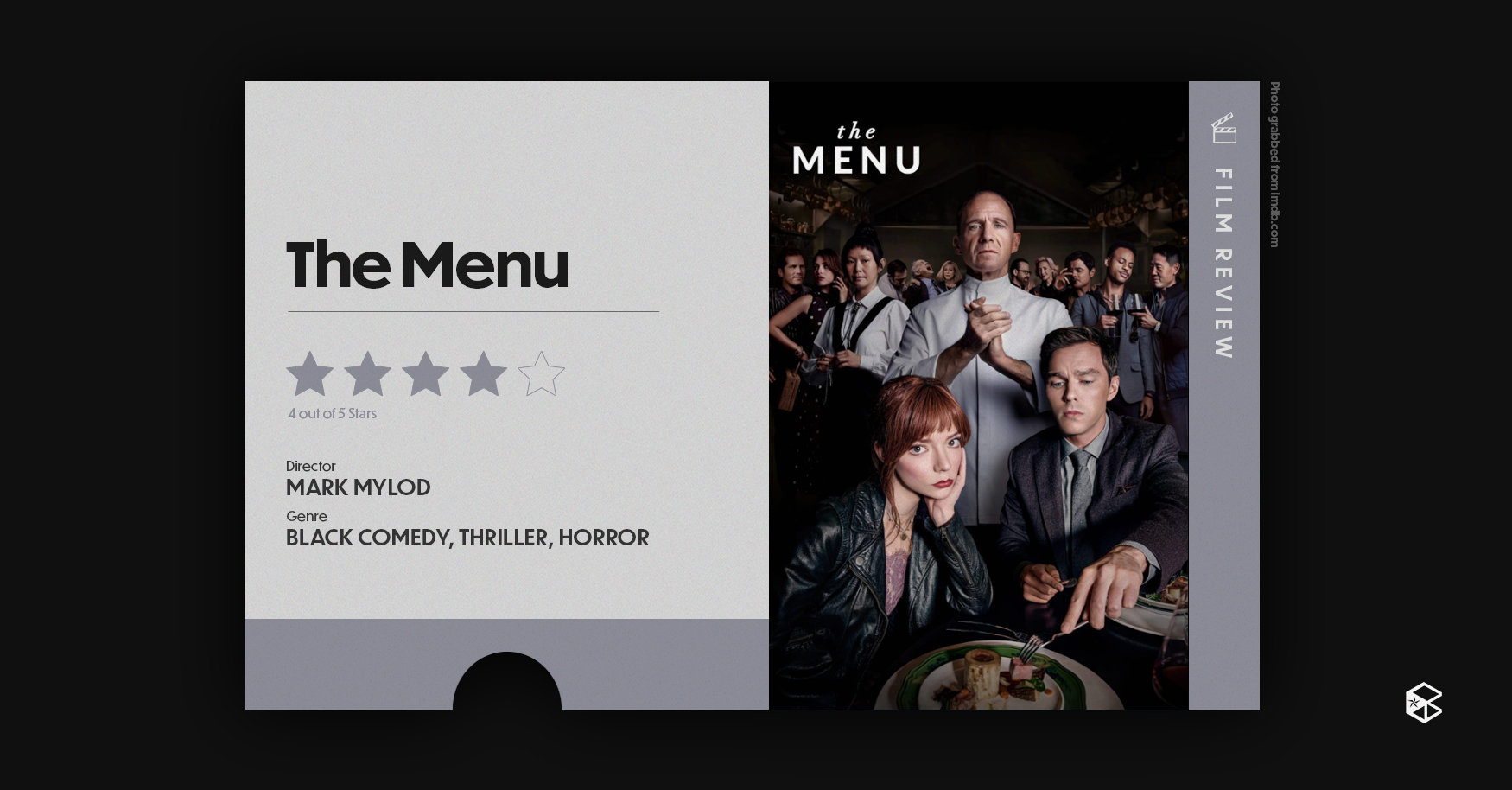 Take a gastronomic trip to the exclusive restaurant of Hawthorne to experience a whole new world of food and thrill. Remain in your seats as spoilers stay in the kitchen!

The Menu serves a unique dining experience as it unravels food culture through its black comedy narrative that will keep audiences hungry for more. Released on Nov. 16, this social commentary becomes food for thought on the vain aspects of the food world.

Audiences follow Margot (Anya Taylor-Joy) and Tyler (Nicholas Hoult) to their elusive dining experience at Chef Julian Slowik’s (Ralph Fiennes) restaurant, Hawthorne, located on a remote island. They are also accompanied by guests of high social standing, such as a food critic and editor, a wealthy couple, a former movie star, and a group of business partners. As Slowik’s assistant, Elsa (Hong Chau), tours the group around the island and seats them at Hawthorne, they are in for a shocking surprise to the full-course menu in store for them.

With the direction of Mark Mylod, this movie’s narrative is simple yet full of surprises. Many of these eye-opening twists are hinted at throughout the film, and the discomfort of this story makes this cinematic experience worth pondering. This includes the mysterious background of Chef Julian and his soldier-like loyal staff in his kitchen. Their eerie personalities contribute to the thrill of The Menu.

Similarly, audiences get to know the diverse yet upper-class guests of the restaurant through each course served at Hawthorne. Without overshadowing the main plot, the scenes of the different guests offer bewildering secrets that give more context to this film as a social commentary.

In line with the film’s goal of criticizing multiple aspects of food culture, The Menu presents its takes on the food world through its characters. They have distinct personalities that reflect certain perspectives of the people who enable such a toxic and pompous culture. These include the unfazed and unimpressed critic and self-important guests who believe they’re entitled to special treatment. Moreover, the haughty connoisseur and influencer personalities take every photo they can instead of savoring the meal itself.

These personalities are waist-deep into the high-class dining experience that they forget what makes food enjoyable as it is. The film showcases the realities of food culture today, emphasizing the perspective of how molecular gastronomy and gourmet cuisine have been deemed superior to common types of cuisines such as fast food. This warped belief in food culture has been highlighted in the film, which is certainly a notion to dissect.

To depict the unsettling story Mylod wants to tell, there are tightly framed shots in the movie which mimic a sense of claustrophobia and anxiety. Audiences can feel the entrapment alongside the guests within Hawthorne through this. While for its musical score, it encompasses all the eeriness and thrill this movie wants audiences to feel, thanks to composer Colin Stetson who is known for his scores in movies such as Hereditary and Texas Chainsaw Massacre (2022).

While The Menu cooks up a black comedy meal for viewers, it still has issues with its story. One thing to mention would be its momentum loss in the middle of the film. There is much expectation for excitement and thrill to pair up and keep viewers entertained. However, the loss of momentum on ideally adrenaline-inducing scenes can make viewers impatient for the story’s proper build-up to the final act.

Additionally, some side characters slightly lack a humane personality aside from their intended caricatures that criticize food culture. Their exaggerated personalities are too static, and they could’ve had more dynamism. But the film still does a decent job of clearly showing the perpetrators of toxic food culture.

Focusing on directly telling its story and message, The Menu evenly distributes the themes of black comedy and thrill within its less than two-hour runtime. A satire of food culture, it amuses audiences with numerous characters one would love to hate. Furthermore, each course presented in this film is well-crafted story-wise to satisfy that hunger for a thought-provoking film.

With the likes of black comedy films such as Parasite, Promising Young Woman, and Don’t Look Up, The Menu is also one to praise for its take on the genre. Hopefully, there will be more peculiar black comedy films like this to stimulate one’s senses.

Enjoy the full-course meals of Hawthorne’s dishes in The Menu screening in cinemas nationwide.

Tags: Film Review, The Menu
Tweets by TheBenildean
Printed from http://localhost:3000 on 4 February 2023