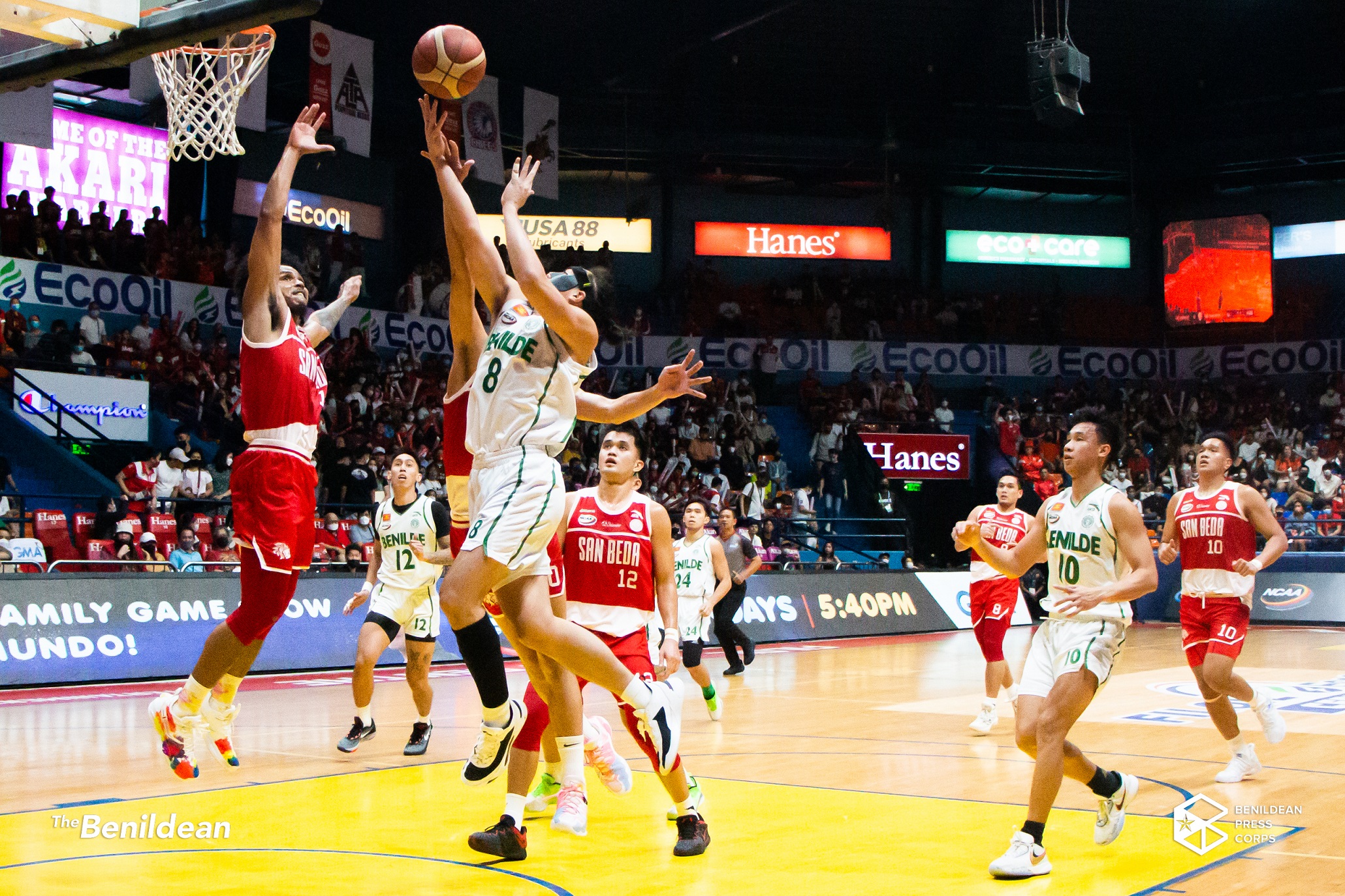 The #BenildeBlazers came from behind to claim a twice-to-beat advantage after edging the San Beda Red Lions.

The De La Salle-College of Saint Benilde (DLS-CSB) Blazers fended off the San Beda University (SBU) Red Lions, 82-73, to clinch a twice-to-beat advantage heading into the final four of #NCAASeason98 on Nov. 22 at the FilOil EcoOil Centre in San Juan City.

Both teams came out firing early in the first period, after consecutive baskets by Mark Sangco and countershots from opposing big JP Bahio. Following the short break, the Red Lions came out roaring, with James Kwekuteye launching uninterrupted long bombs to stretch the lead to ten, 6-16. Despite the Blazers' early jitters, Jimboy Pasturan and Miguel Corteza supplied instant offense the moment they checked in, cutting the deficit to three points, 19-22. After Prince Carlos’ three-ball, the Taft team would weather the storm and take the lead, 24-23. The period ended with both teams even at 26-26.

The Red Lions proceeded to hit their strides in the second quarter after consecutive long bombs by Kwekuteye. The Red Lions would also exhibit their tight defense after holding the Blazers scoreless for nearly four minutes to stretch the margin, 30-37. After the intermission, the Blazers would rely on their charities to reduce the deficit to seven points, 38-45. Despite their attempts, opposing guard Gab Cometa continued to deliver for the Red Lions following successive mid-range shots. The Blazers trailed by nine heading into the half, 42-51.

In the third period, the Blazers went on their customary run and proved to the Red Lions that they are the league's best third-quarter team. Pasturan made back-to-back threes, Will Gozum started to heat up after making consecutive baskets from the paint, and Sangco continued to produce, giving the Blazers the lead back at 59-58. The Blazers would continue to hit their shots in the latter part of the period to maintain the lead. Turning the game around, the Taft squad ended the period up by three,  63-60.

In the payoff period, Sangco continued to deliver for the green and white by stringing together powerful basket finishes. Blazer's sixth man Corteza found his stroke after a layup and a three. The Red Lions attempted to respond, but the Blazers' defense held strong, limiting the Red Lions to only 13 points heading into the final minute of the period. The Taft team’s victory was sealed by superstar rookie Miguel Oczon's fadeaway. The Blazers won, 82-73.

Sangco was named player of the game after scoring 19 points, grabbing 12 rebounds, and dishing out two assists. Corteza and Gozum scored 15 apiece, while Pasturan contributed 13 points.

Benilde ended the elimination round with a 14-4 win-loss record to earn themselves a twice-to-beat advantage heading into the final four.

As of writing, the Blazers are currently one of the top two teams with a twice-to-beat advantage and are on their way to the final four matchups. The NCAA, however, is yet to announce the schedule.