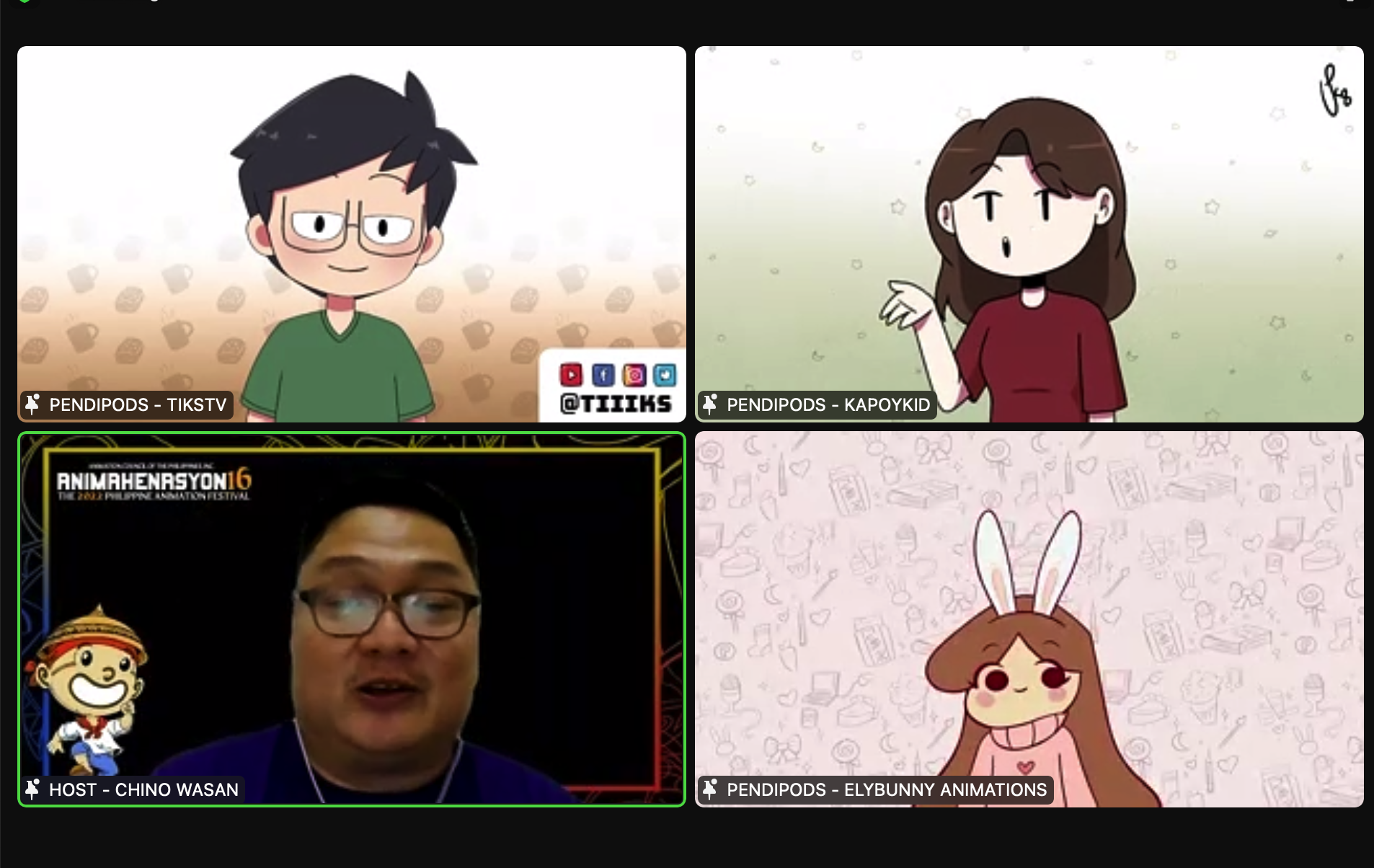 Screenshot Of The Event.

Organized by the Animation Council of the Philippines, Inc. (ACPI), ANIMAHENASYON is the premier Philippine Animation Festival and competition, held online this year on Nov. 18 to 20. In its 16th year, three Benildeans won awards for their works that showcased Filipino animation talent.

The event comprised a conference, film screenings, and a competition. The aim of the festival is to cultivate conversations around developing ideas into unique content that could propel the Philippine animation industry forward toward building a strong catalog of locally produced films and TV series.

The event formally kicked off its first day with ACPI President Juan Miguel Del Rosario’s opening remarks, which touched on the theme “Storify Our Career Pathways.” He hoped to emphasize the fictional and real-life narratives of those who have built their careers through animation. He also shared that the goal of ACPI and Animahenasyon has always been to promote the country's excellence in animation, showcase talents, and push the local industry to be on par with the global scene.

“Humble yourselves, learn from experts, have good ethics, don't be entitled,” Mr. Del Rosario imparted to the audience of eager students, fans, and industry professionals.

The first event was an art jam and panel discussion session featuring popular Pinoy animation YouTubers Arkin Animation, ElyBunny Animations, TiksTV, and KapoyKid. The group shared how their channels started and their insights into animation as they each doodled on a digital canvas shown on the screen. They touched on the process behind their videos, their biggest influences, and what they hope to accomplish through their work. 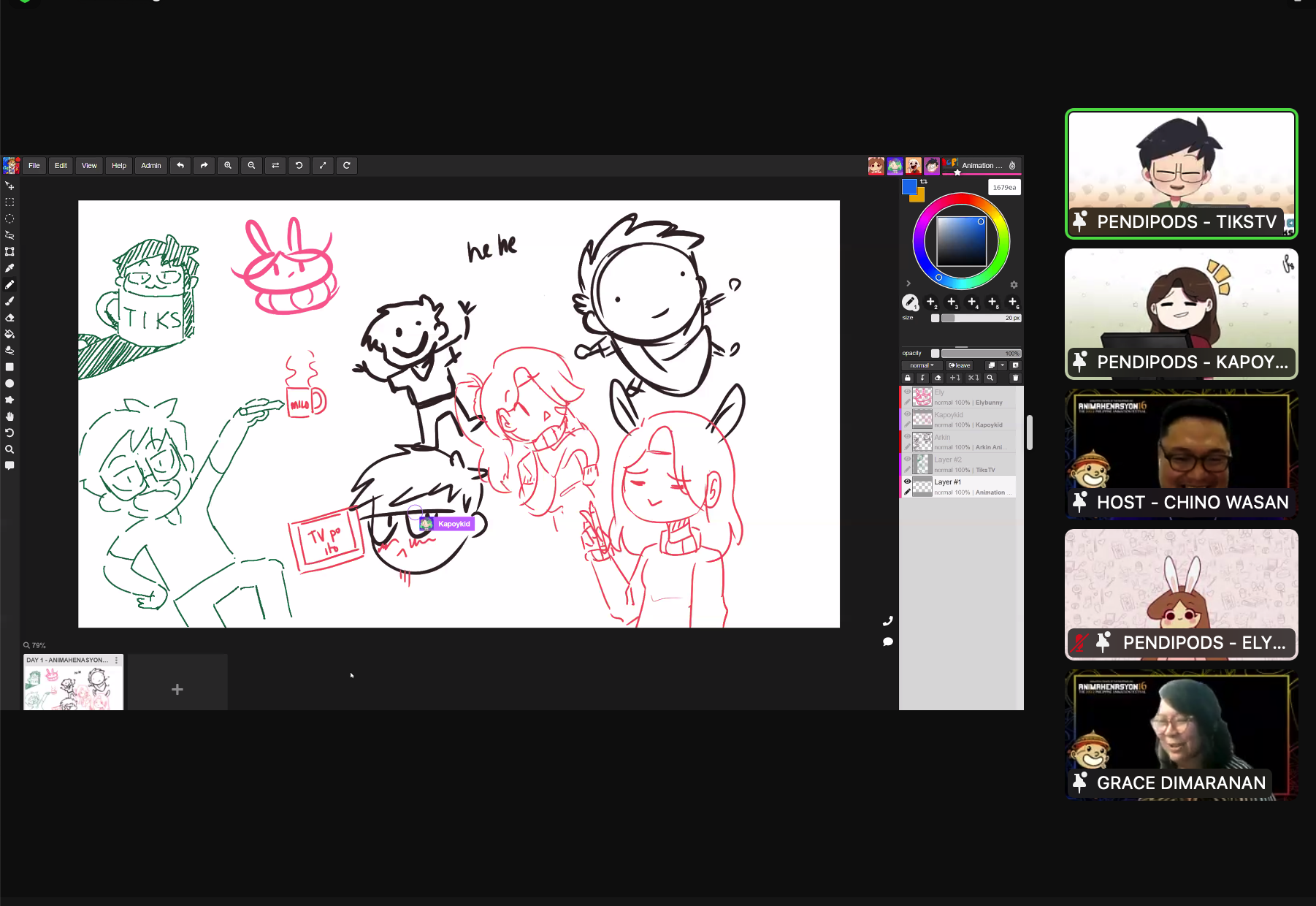 The day concluded with a Visual Development panel discussion featuring a group of seasoned professionals namely Tito Romero, Micheal Gorospe, and Hardy Gamboa. The three skilled animators and art experts discussed their work ethics and creative processes in the animation industry. Furthermore, they were also able to inspire other fellow animators by giving words of encouragement, including ways on how they can further elevate their unique artistic identities.

The second day of the event began with the session titled “Creating an Animated Short Film: Takano Intersection.” The talk was hosted by multi-award-winning 2D animator Mizuki Ito, where he spoke about his film Takano Intersection (2021) and detailed his animation process. He also took the audience through his workflow, from scriptwriting to storyboarding to music production, before he embarked on his three-year animation journey to put together this film.​​

The next and final session of the day was titled “Behind the Scenes of On Gaku: Our Sound,” where another award-winning Japanese animator ​​Kenji Iwaisawa spoke on his innovative rotoscoped feature film, On Gaku: Our Sound (2019)​​ about some delinquent high schoolers who, on a whim, decide to start a band. 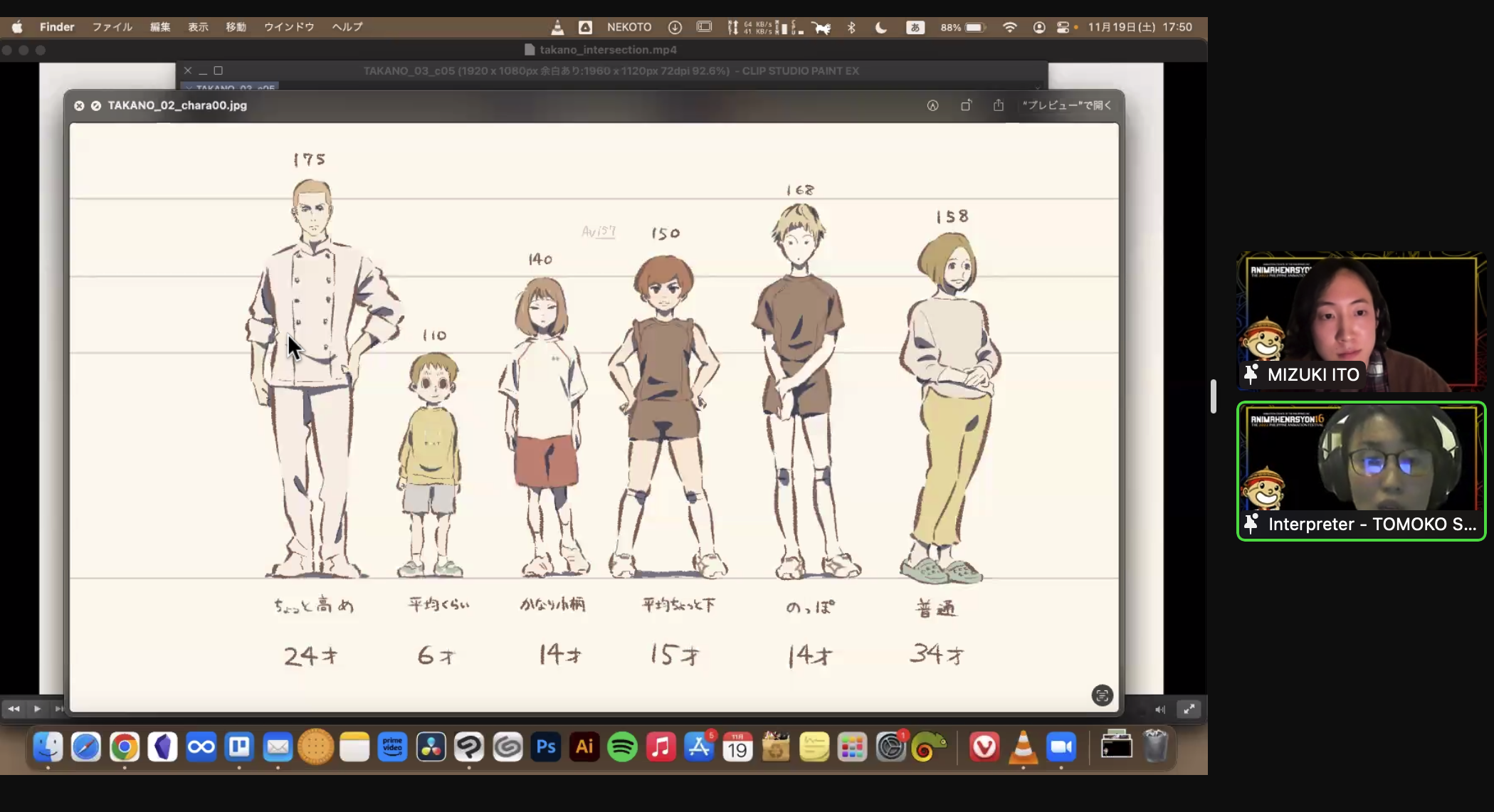 Iwaisawa spoke about the creative process, adding that the film took seven years to produce and was completed with over 40,000 hand-drawn frames. The story was ​​based on a manga created by Hiroyuki Ôhashi, with Iwaisawa masterfully capturing the muted style of the original artwork​​, servicing the narrative and the budget, and exemplifying world-class artistry and an undeniable passion for animation.

The third and last day of the event started with a Recruiters Panel discussion featuring a group of studio owners and recruiters, Juan Miguel del Rosario, Marilyn Montano, Mosmira Nebril, Marla Rausch, and Alstaire Sarthou. The professionals expounded on the specific skill sets they look for when recruiting animators. Each panelist emphasized the application requirements needed for their respective companies, together with the personality traits and attributes they seek among applicants.

Following is an open conversation with television writer and znimator Mikki Crisostomo. Given the opportunity to work for Disney, she highlighted the step-by-step process of animation writing in the workplace, from brainstorming ideas to working with a team of writers. Her passion for scriptwriting is expressed further as she shared her experience being a writer for the Disney television series The Owl House (2020).

The film viewing for Anikompetisyon, the event’s annual competition program, took place as the top 20 finalists presented their animated short films to the audience. Promoting creative excellence, the competition aimed to elevate and propel the Philippine animation industry by showcasing films created by talented students and professional animators. Afterward, a Q&A segment was held to give a platform for the candidates to tell their stories and inspiration when making the films.

To close the event, the winners of the awards were announced via Facebook Live:

For the closing remarks, Dr. Roland Tolentino, the Head of the National Committee on Cinema, expressed his utmost gratitude and appreciation for the participants of Anikompetisyon. He encouraged animators to continue utilizing the advantages of modern digital technology as Philippine animation moves toward its golden age.

"More genres and film styles need to be explored in their own unique ways, to tell Filipino stories that only animation, as a unique form, can tell," he stated. Festival Director Ricky Orellana, Jr. congratulated the finalists for their outstanding films as he looked forward to next year’s Animahenasyon.

To learn more about Animahenasyon and ACPI's future events, head over to their official website and Facebook page for updates.