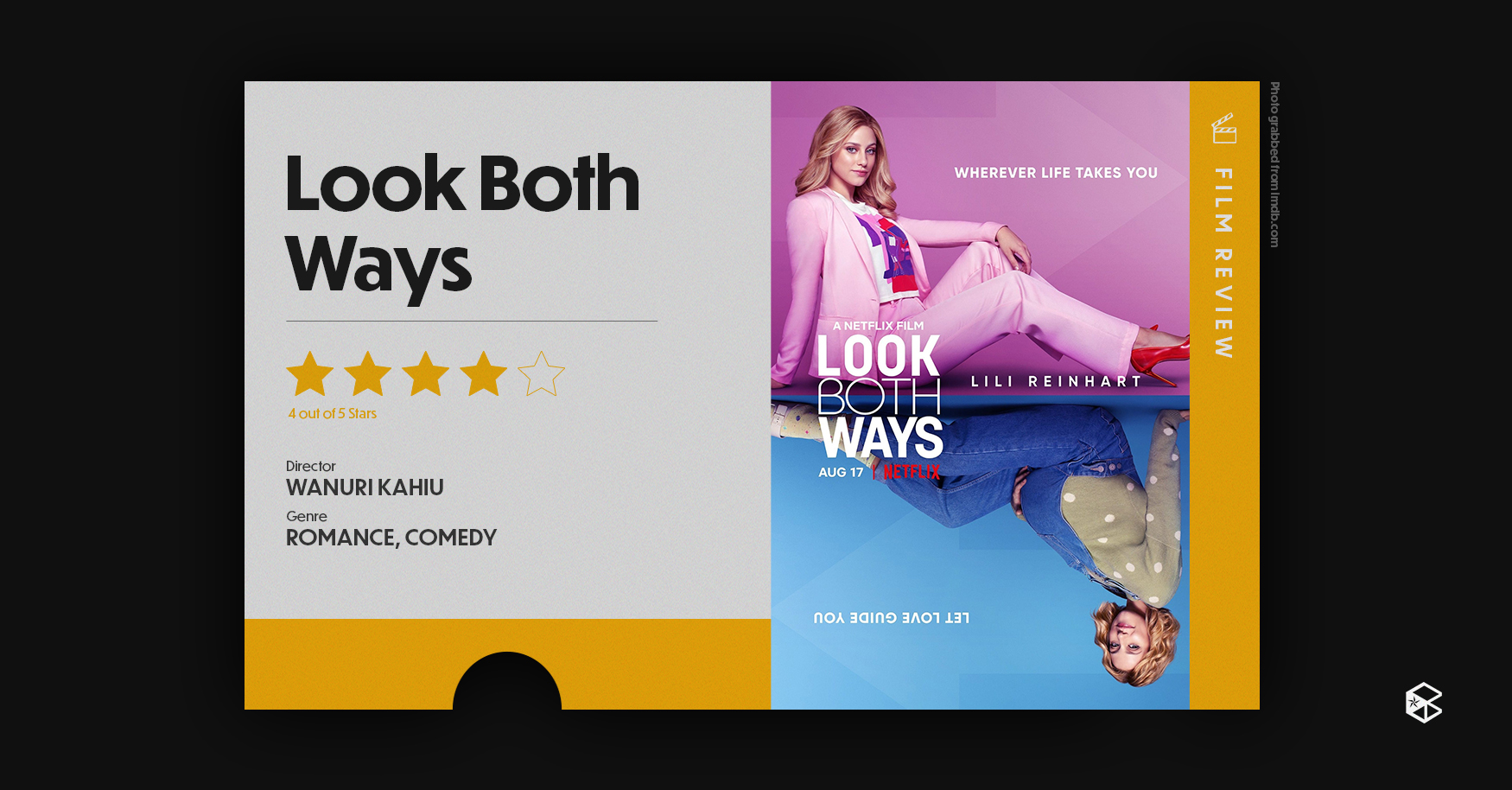 Sometimes things work out either way—but not in the way you would expect.

In Netflix's new romantic comedy Look Both Ways, we explore two diverging paths that delve into the questions of “What if?” and “What now?” Lili Reinhart owns the small screen as Natalie, an aspiring animator whose hopes, dreams, and five-year life plan begin to unravel in one pivotal moment.

On the night of her graduation, Natalie takes a pregnancy test. From there, her life diverges down two roads—one in which the test is negative, and she is able to stick to her plans of moving to Los Angeles with her best friend, Cara (Aisha Dee), to chase her dream of becoming an animator. Meanwhile, in an alternate timeline, the test is positive, and she is faced with the hurdles of being a young parent, alongside the baby daddy, charming drummer Gabe (Danny Ramirez). As each path takes Natalie on vastly different journeys across five years, we see her highs, lows, and both timelines’ messy and magical in-betweens.

Directed by the celebrated Kenyan director Wanuri Kahiu of films such as From a whisper and Rafiki, the film focuses on Natalie’s aspirations and relationships in both timelines, with aspirations taking the main stage for the first timeline, where Natalie isn’t pregnant. While in the timeline where she is, her relationships are the story's driving force, emphasizing how choices and pivotal life events may lead to different priorities.

For instance, in the timeline where Natalie gets to chase her dreams of pursuing a career in animation, love and relationships take a bit of a backseat. Her relationship with the aspiring filmmaker Jake (David Corenswet) dims in comparison to her career and repeated attempts to impress her boss and animation giant, Lucy Galloway (Nia Long). On the other hand, the timeline where she gets pregnant gave more importance to her relationships with her new-age parents, who were enjoying the peace and quiet of an empty nest, her growing daughter, and ultimately, her romance with Gabe.

By the end of the film, we find that both Natalies have come full circle, with both finding themselves at a promising new beginning with their animation career and the various relationships in their life.

The beauty in this film is not in its neatly-wrapped ending but in the process that leads us to it. As each timeline progresses, we see Natalie endure different struggles and sacrifices. In the timeline where she had a child, her passion for animation had been all but abandoned, as motherhood took precedence over everything else. This, alongside a slew of inner conflicts and narrowly-missed chances to be with Gabe, almost had us convinced from the get-go that this timeline’s Natalie would never reach the dream she had yearned for. By contrast, the Natalie who pursued her animation dreams seemed like she was going to fulfill them, only for those aspirations to be torn down in a torrent of brutal advice from Lucy.

But as it turns out, rock bottom is precisely where both timelines’ Natalie needed to be to find her voice, begin to achieve her animation dreams, and find the courage to let herself simply live and love.

Look Both Ways takes audiences into an introspective adventure as we experience the all-too-familiar triumphs and turmoils of growing up alongside these characters. The film explores the mundane and often messy processes that come with figuring out who you are, who you want to be, and what it is you truly value as a young adult.

The film puts a softer, more sentimental take on the classic sliding doors-esque plot. Its visual language is strong, from using varying hairstyles to communicate the different characters’ state of being and placement within the storyline to the seamless transitions between each plotline. Intertwining animation to emphasize the movement of time was also an excellent nod to Natalie’s dreams of becoming an animator. Additionally, the use of pastel tones and light, monochromatic blues to differentiate the timelines where Natalie is in LA and the one where she becomes pregnant, respectively, was a subtle touch that shows how much attention to detail was placed into the film’s visual storytelling.

Combined with Reinhart’s poignant performance as Natalie, its well-structured plot, subtle discourse, and neatly-executed endings, it could be said that Look Both Ways is an almost perfect rom-com. However, the eagle-eyed cynic can spot its inherent flaws, namely its lack of interpersonal conflicts, especially with Natalie’s love interests. While both Gabe and Jake are well-portrayed, their writing seemed to be a tad bit too good to be true. The same goes for Natalie’s parents, whose knee-jerk reactions to their daughter’s predicaments seem too short-lived to make sense.

Still, Look Both Ways is a must-watch film for any 20-something currently trying to find their place in the world. It is simple to follow, endlessly endearing, and subtly gorgeous in both its thematic and visual identity.

Catch Look Both Ways on Netflix, and remember that even the road less traveled can lead to things working out in the most unexpected ways.