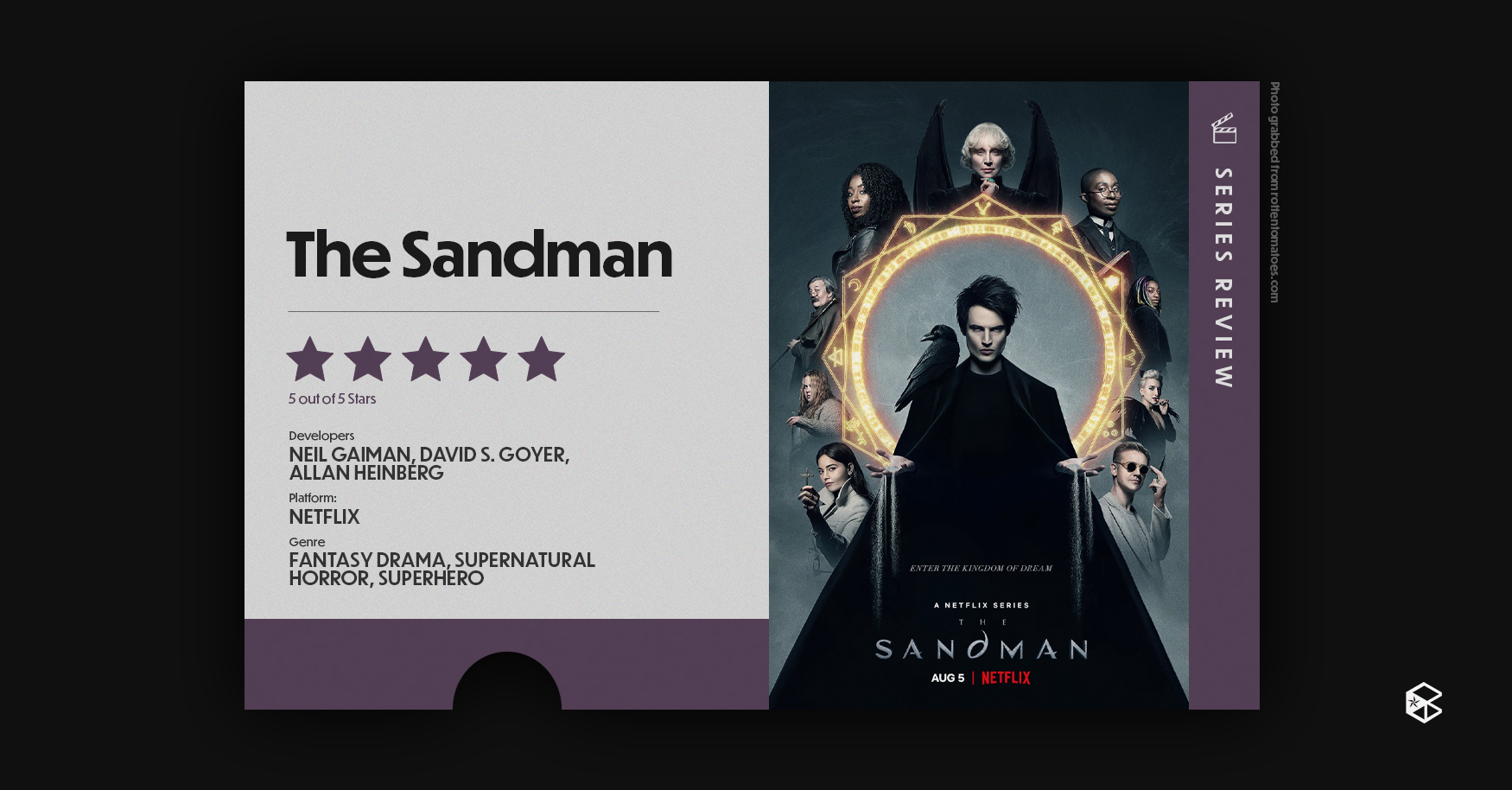 Developed by acclaimed English author Neil Gaiman, along with writers David Goyer and Allan Heinberg, the dark-fantasy horror series “The Sandman” was released on Netflix on Aug. 5, along with a surprise bonus episode on Aug. 19. Based on the comic book series of the same name, the series draws its themes from the innermost desires and secrets of humanity, all from the perspective of an immortal being.

After three decades in development hell and a dozen or so rejected scripts later, Netflix’s impeccable take on “The Sandman” finally sees the light of The Waking.

Off to never-never land

Set in a rich, multilayered universe of fear and fantasy, the Endless are seven individual anthropomorphic manifestations of each aspect of life, such as Destiny, Death, Despair, and Desire, to name a few.

While their cosmic powers are beyond ordinary human comprehension, the Endless are very much like any dysfunctional family of siblings that often clash and meddle with each others’ affairs. However, the only difference is that these fights often result in cataclysmic, world-ending events.

Enter Sandman, or more commonly known as Lord Morpheus or Dream (Tom Sturridge), the show’s titular protagonist and the King of Dreams. Sole sovereign of the metaphysical realm of The Dreaming, Dream is an aloof, brooding character with a rather cold exterior and a strong distaste for change.

However, during one of Dream’s ventures to The Waking world to apprehend The Corinthian (Boyd Holbrook), a rogue nightmare created by Dream himself, he is captured by amateur occultist Roderick Burgess (Charles Dance), who initially sought out to capture Death to do his bidding instead.

It is here that not only is Dream stripped of his powers and freedom, but his reign over The Dreaming. This resulted in pure chaos and disaster in The Waking, with both dreams and nightmares running amok without their master.

The show, however, primarily revolves around Dream’s eventual escape from a century-long imprisonment, and how he tries to restore balance to his shattered realm and the consequences of his absence. On this quest, our protagonist meets a motley crew of characters that either are out to help or kill him. Some of the former being Dream’s dependable allies, such as Matthew the Raven (voiced by Patton Oswalt) and loyal librarian Lucienne (Vivienne Acheampong), who assumed her role as the guardian of The Dreaming in lieu of her monarch.

On the opposite end of the spectrum, Dream also encounters a number of foes who take it upon themselves to interfere with his journey, one of which is the Lightbringer themself, Lucifer Morningstar (Gwendoline Christie), whose imposing yet deceptive presence leaves a bitter taste in one’s mouth. Christie’s performance is by far one of the most convincing and bone-chilling of the cast, a far cry from her role as the headstrong and endearing warrior Brienne of Tarth in HBO’s “Game of Thrones.”

John Dee (David Thewlis), the bastard, mortal son of Dream’s abductor Roderick Burgess, is also a force to be reckoned with. Thewlis elevates this role with an alarming level of lunacy and paranoia that only an actor of his caliber could achieve. He certainly has a penchant for playing villains in the DC Universe, counting his role as Ares in 2017’s Wonder Woman from director Patty Jenkins.

And what would “The Sandman” be if it didn’t show a bit of little sibling love (and rivalry) between members of the Endless on-screen? Most ironically, Dream’s elder sister Death (Kirby Howell-Baptiste) is an absolutely charming character whose story and influence in the sixth episode “The Sound of Her Wings” make it the most poignant episode to date. However, it wouldn’t be a dysfunctional family without the presence of an annoying younger sibling. Mason Alexander Park delivers a deliciously aggravating performance as Desire, whose cruel antics are the prime mover of the second half of the show.

The show’s impressive cast and stunning visual effects and settings, however, are only part of what makes this adaptation such a masterful take on “The Sandman” universe.

Mr. Sandman, bring me a dream

What lies at the heart of “The Sandman” both comics and series adaptation alike is the ever-present concept of humanity and the inherent fragility and strength that comes with it. A recurring theme within the interweaving stories of the DC Universe is how god-like beings learn to become more like humans, and “The Sandman” is no stranger to this.

By far, the most compelling episodes are where the story explores the complexity of the human psyche–desires, dreams, fears, and secrets. The story is indeed just as much about your typical, everyday office worker just as it is about Dream himself. The show does a splendid job of showing how dreams, nightmares, and everything in the non-reality are just as important (if not more) than the world we awake to each day. Dreams are the essence of life itself, and our protagonist comes to realize this on his journey just as we do.

As we further probe into the ways of humanity, we also get glimpses of Dream’s own nature. His internal struggle with the changing of times and the ebb and flow of life itself are what makes his character so compelling. We get to witness the metamorphosis of Dream–initially an apathetic character with little care for concerns outside his own–who learns to accept change for all that it is. Sturridge’s portrayal of the pale-white Lord of The Dreaming is nothing short of immaculate. Indeed, Gaiman has found his Sandman.

Lastly, not only does Dream represent humanity’s innermost fantasies and imaginations, he also embodies hope. The fourth episode of the show, “A Hope in Hell,” presents this idea well, where Dream is in the midst of losing a duel to Lucifer, the ruler of Hell. Jaw-dropping visuals aside, its premise leaves viewers with a beautifully poignant question that Dream challenges his opponent with, “What power would Hell have if those imprisoned here were not able to dream of Heaven?”

Or, as so eloquently said by Matthew the Raven, “Dreams don’t f*cking die.”

Keep one eye open when you sleep and catch the first season of The Sandman, currently streaming on Netflix.