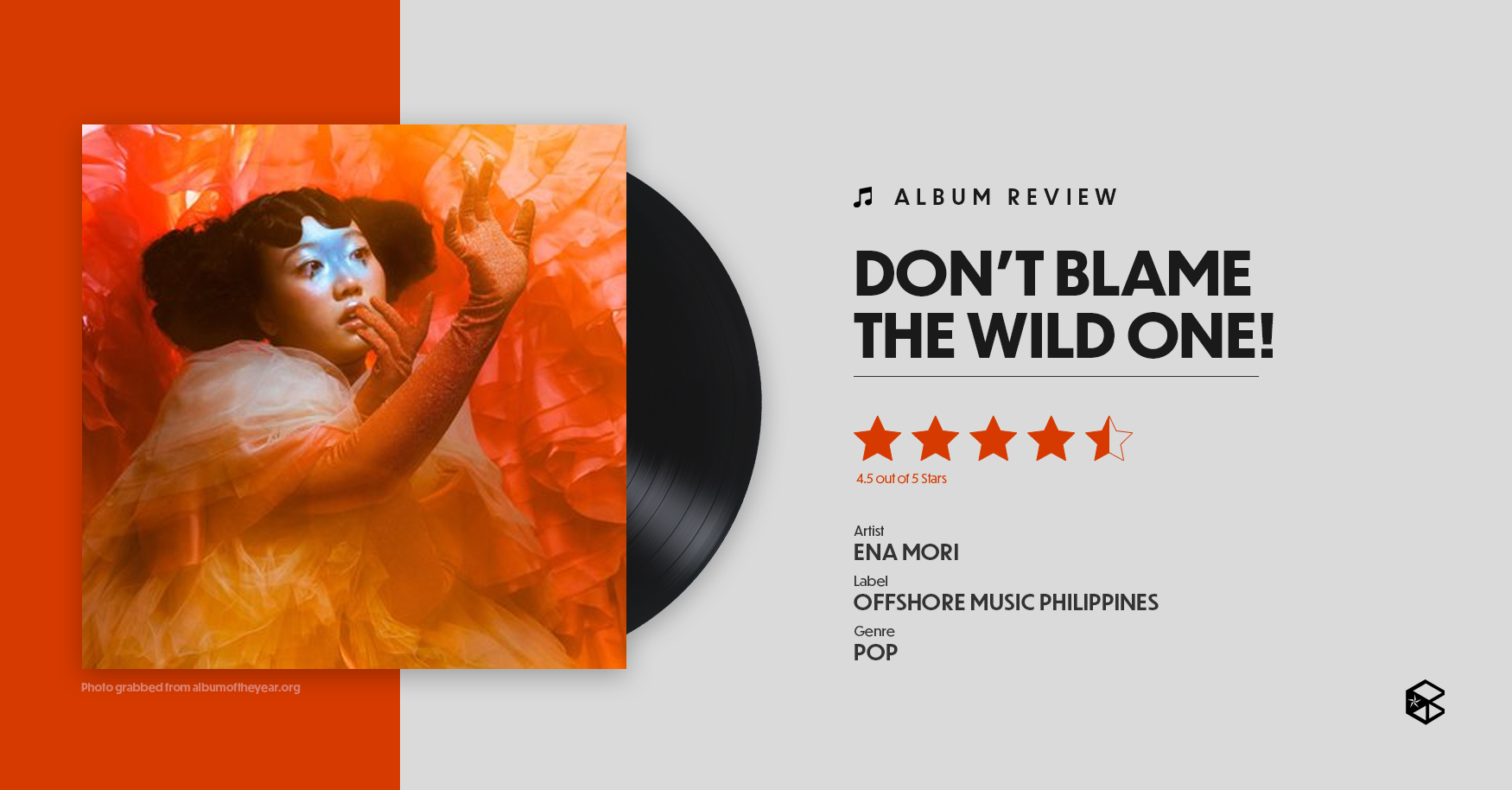 Groove to songs of self-doubt in ena mori’s “DON’T BLAME THE WILD ONE!”

ena mori disturbs the comfort with unique and unapologetic pop melodies in her new album.

Filipino-Japanese singer-songwriter ena mori is back once again with her experimentally expressive music in DON’T BLAME THE WILD ONE!, released in July under Offshore Music Philippines. The 12-track album offers pieces of her bleeding heart to listeners, featuring songs from her safe space such as “SOS,” “VIVID,” and “FALL INLOVE!”

ena mori channels her self-doubt into vibrant and synth-infused sounds that bring a lot of quirkiness to each track. With the help of producer Tim Marquez (timothy Run), the singer-songwriter was able to fully materialize and convey her messages of discomfort alongside her distinct style of creating music.

The album opens with the 21-second track “there’s a fire in my kitchen up it goes I’m to blame” that perfectly captures ena mori being unapologetic for her actions. The track accelerates into a sustained melody until the bass riff of the album’s titular track “DON’T BLAME THE WILD ONE!” kicks off. This second song speaks of the artist’s yearning to know what’s on the minds of other people.

In an interview with Bandwagon Asia, the singer-songwriter says this song was inspired by her experience in a coffee shop in Japan. While observing the people walking outside on the streets, she was curious if those people had something to say and express, hence the birth of this bop.

Moving on to “VIVID,” a shameless love song about insecurities and fears in romance, ena mori belts out in the chorus “How can I let go of this feeling? Trapped in like a prisoner. But the more I think about it is vivid,” which lyrically envisions the conflicting anxieties that can happen inside one’s mind when it comes to the complicated cycle of love.

Similarly, “KING OF THE NIGHT” tackles the topic of insecurities the singer had when she experienced bullying in the past. This is a courageous anthem that shows how much the singer-songwriter was “hurting badly” back then, and how she rose up against it later on.

Beats that bleed through

After the epic tracks, we are then lulled by “TALK! TALK!,” a song on self-doubt. This leads to multiple funky bass breaks and cascades of synths. Listeners are then surprised by the sudden break-in of an orchestral resonance at one point of the song. It certainly catches people off guard with its experimental sound.

In line with self-doubt and questioning oneself, ena mori asks, “Where do we go now oh, bleeding hearts?” in “OH BLEEDING HEARTS?” a desperate cry to find which direction we should go to seek answers to our questions.

Furthermore, “A HIGHER PLACE” features a break from the drum beats heard across the songs in the entire album. It plays with plucks of synths and bold horns which ascends into a somewhat comforting tune, its meaning centering around dealing with expectations from the people around you.

Sounds of making a stand

A change in perspective from the previous tracks, “SOS” is ena mori’s lamentations across various subject matters such as the isolation within a pandemic, the government, and justice. With that, what makes this a formidable eighth track of this album is the stand she takes while singing this song. Listeners can find in the song’s outro, a repetitive multilingual close “Youth make our beautiful future. Youth ang lilikha 素敵な故郷 (suteki na furusato),”  with the Japanese lyrics translating to “lovely hometown.” This outro reflects her stand on wanting a beautiful future for her homeland and identity of mixed heritage.

The singer-songwriter returns to the subject of romance in the next track entitled “FALL INLOVE!,” as listeners get the chance to bust their moves with its upbeat chorus and bubbly tune.

Meanwhile, “WHITE ROOM” touches on ena mori’s worries of what others think of her. She reassures herself and her listeners with the question, “Who are we to say that we are not enough?” This urges one to realize that our worth is not based on what other people think or say, as only we can decide that we are enough based on our own standards.

At the end of a party

Nearing the end of the album, “RUNAWAY HOLIDAY!” has a steady beat that allows listeners to enjoy a nightlife-like experience with the song. It’s a bop that conveys the message of embracing oneself which is perfect to play when hanging out with friends.

To close the album, a reimagined version of “FALL INLOVE!” puts listeners in a trance. It’s gentle enough yet still maintains the pop vibe the singer-songwriter has. Similarly, it’s as if listeners are drifting across the space of romance, which wraps up DON’T BLAME THE WILD ONE! quite monumentally.

This full-length album has a lot to offer in experimental pop music. She captures the struggles of self-doubt and personal worth with so much care like in her previous songs. For a peculiar and lively sound, listeners can still feel the raw emotion she pours into her lyricism which is no doubt authentic and vulnerable.

As a notable artist in the OPM scene, she has made quite a bigger mark on her audience with her new music. Hopefully, there will be more of the singer-songwriter’s quirky and spirited melodies in the near future.

For now, revel in and dance to the whimsical music ena mori has conjured up, available on various music streaming platforms.