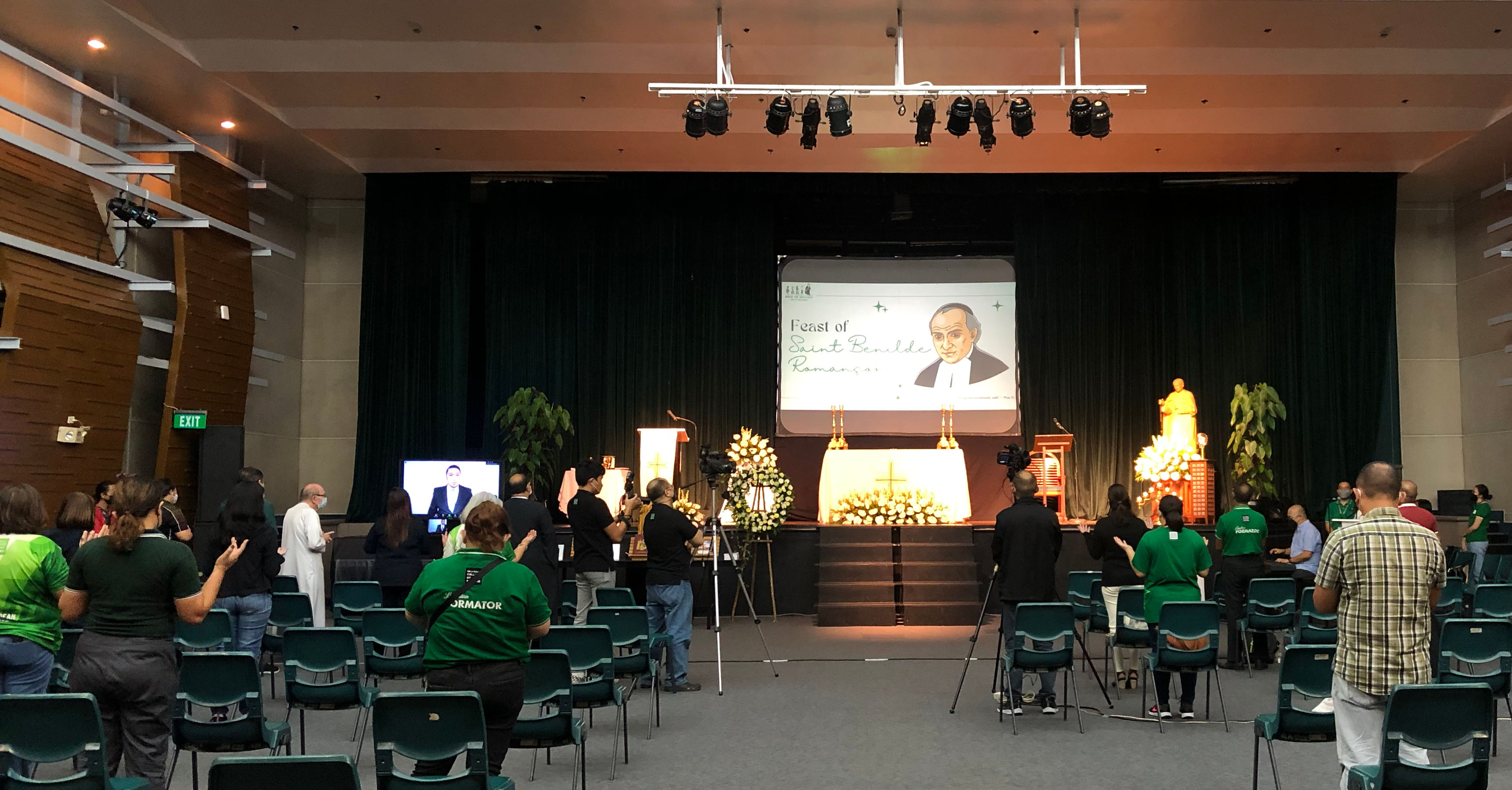 “[...] And just like [Saint] Benilde, may we educate others through faith, zeal of service, and communion in mission.” - Rev. Fr. Kali Pietre Llamado

The yearly celebration of the feast of Saint Benilde Romançon holds us to honor his work as a Lasallian brother and an example of a faithful servant of God. Held on Friday, Aug. 13, in DLS-CSB’s Taft Campus, the celebration featured a number of activities that brought members of the Benildean community together in a time of  commemoration and respect for the patron saint.


The event commenced with a novena at 10 a.m. at the ARG Theater, beginning with a prayer to Saint Benilde that highlighted the College’s continuous mission for education and wished for blessings and good grace upon the institution. A song for the patron saint then played after, before opening up to a short break as a transition for the next segment of the event; the book launching hosted by Benilde’s Center for Lasallian Ministry (CLM).

Among the books launched was “Memoir,” presented by Mr. Ricoflor Fuerzas. The book is a compilation of creative outputs from the Benildean Online Reflection Encounter sessions or more commonly known as “BeniRe.” Meanwhile, the second book, “Lasallian Supplements of the Roman Missal and Lectionary” was presented by Ms. Teresita Maiztegui and contains information about Lasallian feasts, memorials, and brief biographies of all Lasallian saints. Lastly, the third book entitled “Gifted and Rekindled” was presented by Mr. Edwardson Juta, and is a collection of reflection and prayers in the time of the pandemic.

After the book presentations, Vice President of Lasallian Mission and Student Life (LMSL) Ms. Nicky Templo Perez took to the stage to congratulate the CLM associates for meeting the spiritual needs of the community by “adapting” to the new normal.

“Congratulations to our CLM associates for quickly adapting to a pandemic world and for continuing to meet the need for prayer and reflection of our Benildean community,” Ms. Templo-Perez stated.  She also thanked the CLM associates for the books’ use in the community’s spiritual life.

After a short break, the Holy Eucharist Mass in honor of Saint Benilde was then held at the same venue. Presided by Rev. Fr. Kali Pietre Llamado, he detailed Saint Benilde’s vocation as a teacher to children, his rigorous prayer life and charity, and his leadership through wisdom. Fr. Llamado also highlighted how Benilde had spearheaded the development of religious vocations. He is seen to be an inspirational and admirable figure as someone who is humble and dedicated to serving others.

“And just like Benilde, may we educate others through faith, zeal of service, and communion in mission," Fr. Llamado urged.

As the liturgy ended, Benilde President Br. Edmundo “Dodo” Fernandez FSC went up on  stage to remind the community of how “God’s word shakes us,” and that we should “celebrate the feast with its richness.”

Fr. Llamado then returned to remind again how Saint Benilde was a small man, both physically and through his simplicity. He stated that we should be humble and lowly, just like the patron saint, as we have gotten used to being high and exalted. “Madalas ‘di na tayo ma-reach,” Fr. Llamado said lightheartedly.

Br. Dodo then took to the stage again, reminiscing about the past feasts he’s attended in the pandemic through his three-year presidency, and that this was his first face-to-face one. He then highlighted how Saint Benilde was an “extraordinary example” throughout his life, as he was never one to use harsh words, never impatient, and how he always encouraged the people he taught to do things well. He then ensured that the College will continue its mission of providing high quality and innovative Lasallian education. A final prayer concluded the mass, which made way for the “Salu-Salo’t Pakulo” lunch at the Greenway Square, Taft Campus.

The feast offered various food prepared by the Benildean staff, such as palabok, hopia, lechon, gulaman, as well as some sweets and candies. There were also games and activities that kept the students entertained and busy, such as darts and puzzles.

The celebration then ended with the Hybrid Community Fellowship, which was spearheaded to foster unity and solidarity among the Benildean community. Students who were not able to attend the event face-to-face were also given the opportunity to join the festivities via Zoom. The participants engaged in different games, such as the whisper challenge, jeopardy, family feud, and bingo.