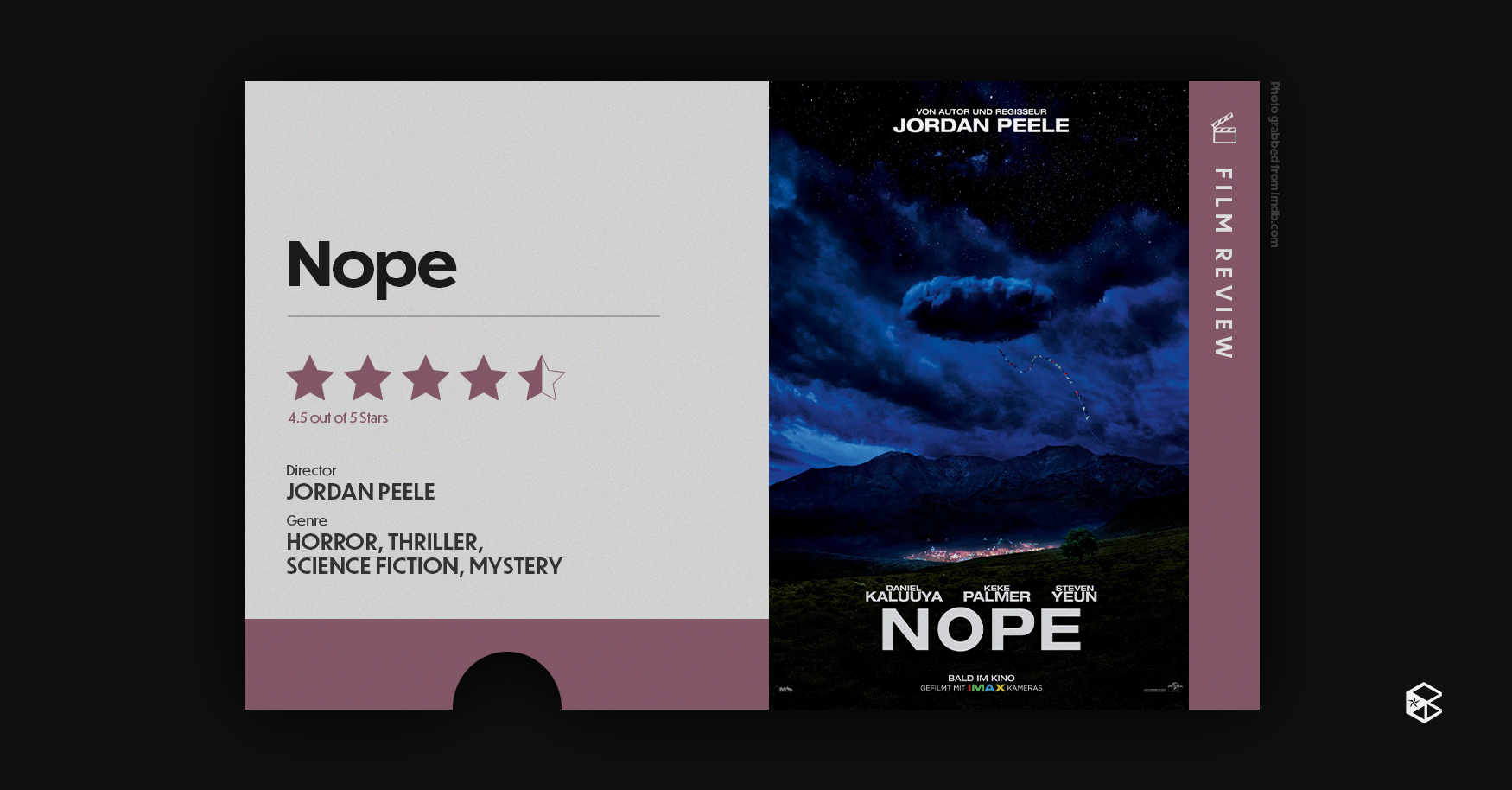 The director of surreal horror films “Get Out” and “Us” takes us on another journey of mysticism under the guise of blockbuster science fiction spectacles that came before.

American actor-filmmaker Jordan Peele offers a subversive venture into science fiction horror with Nope, which was released in Philippine cinemas on Aug. 17. Whilst retaining his usual style for artistic horror and social commentary, Peele expands into the otherworldly horizons of sci-fi alien tropes and the “us versus them” concept.


Nope follows two siblings OJ (Daniel Kaluuya) and Em Haywood (Keke Palmer), who currently run their father Otis’ (Keith David) “Haywood's Hollywood Horses Ranch” in California, as they discover something strange and unusual in the clear desert skies above them.

On the other hand, Jupe (Steven Yeun), a former child actor and founding owner of the theme park “Jupiter's Claim,” tries to profit from this unidentified aerial phenomena (UAP).

More often than not, films in this genre bring together a group of people trying to solve the mystery of the unknown. The characters that Peele created are no stranger to that. After all, humans have always been captivated by the idea of searching the unknown and what lies beyond our wildest imaginations.

Peele is known for creating grounded stories that connect with society through social commentary. Get Out, his 2017 directorial debut, echoes the history of slavery in the United States, and racism and discrimination are still present in society today. On the other hand, his follow-up film, Us, interprets societal class as a mirror towards ourselves. The rich versus the poor, the whites versus the minorities–the use of doppelgangers in the film sums up the way we see ourselves in others.

Nope contains elements of what made Peele one of this generation’s perennial horror directors working today. However, he challenged himself to even go further than the norm. Much can be said with the film’s heavy inspirations from the artistry of legendary American filmmaker Steven Spielberg.

Spielberg basically created the first “true” summer blockbuster with 1975’s Jaws, providing a thrilling cinematic experience that banked on the “less is more” concept. Peele understood what made Jaws so electrifying by intentionally concealing the terror until the final part. However, despite the former film’s influence, 1977’s Close Encounters of the Third Kind, also directed by Spielberg, was obviously the biggest inspiration for Nope. Acting as a horror-adventure story, both films primarily focus on how people deal with uninvited visitors.

Peele pays homage to Spielberg and sprinkles the theme of humans obsessing over the unknown. The trailer for the film alone chose to hide as much information about the “aliens” as possible, leaving you with more questions than answers. Much like the trailers for Get Out and Us, there is an emphasis on setting the tone rather than explaining the plot’s entirety.

The film isn’t a popcorn blockbuster that is expected to gross millions of dollars at the box office. What it is, though, is a blockbuster spectacle that appreciates the nuances of humans at the center of it all, even with discovering something unprecedented. OJ and Em are siblings bonded over their family history. Everything happening seems to call back to remnants of their past, and the film doesn’t shy away from showing more of their backstory.

In contrast to encountering familiar faces, however, OJ and Em are aided by Angel Torres, an electronics store employee played by Filipino-American actor Brandon Perea. Despite initially being a stranger to the siblings, Angel helps them set up the surveillance cameras to try and capture the “aliens” living above us.

Nope is an ode to going to the movie theaters and experiencing a story that reflects the way we see our own lives. Definitely, this film is worth seeing on the largest screen possible. The original score alone pulls you in, especially in the film’s second half.

Having the pleasure of watching this film at a 7:30 p.m. screening in an empty theater, personally, was a worthwhile experience. This opportunity could make anyone reflect on their personal connection to the film in such a profound way.

Truly, Nope is a film to celebrate, not just for its cinematic achievements, but for its message of bringing people to the cinemas to experience a spectacle.