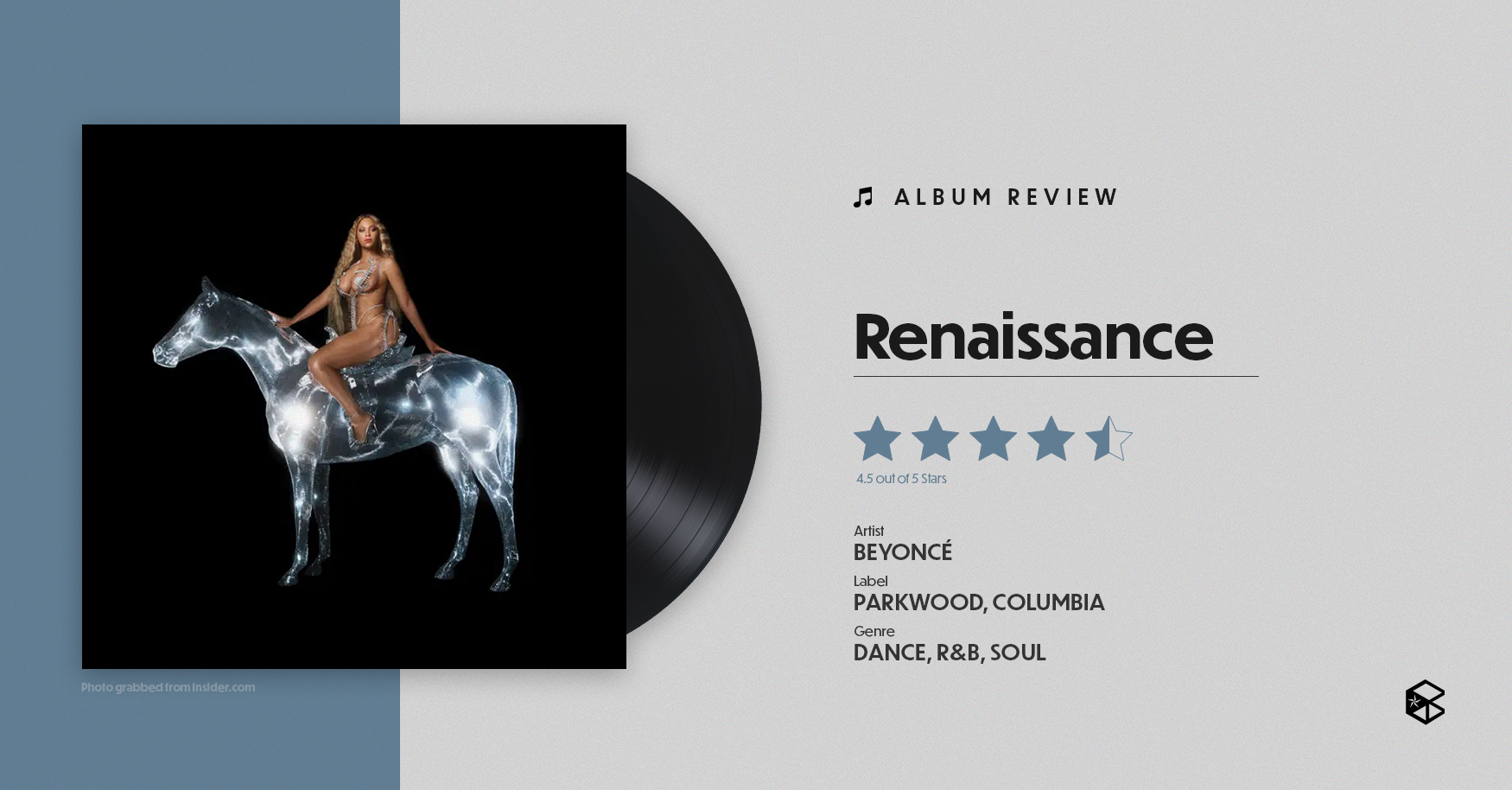 Bow down to Queen B!

The queen of all queens, multi award-winning American singer-songwriter Beyoncé released her phenomenal seventh studio album Renaissance on July 29 through Columbia Records and Parkwood Entertainment. This first act of her trilogy project features 16 tracks of pure adrenaline anthems, including the previously released single, “Break My Soul.”

Bringing the electricity of club culture and nightlife, Beyoncé recorded the first installment of her three-act project over three years during the course of the COVID-19 pandemic. In this period, her creativity flourished as it brought her an escape from the uncertainty of the world. “It allowed me to feel free and adventurous in a time when little else was moving,” she stated in an interview with MTV.

The album is inspired by “Uncle Jonny,” the singer’s fabulous godmother who she mentioned as “the first person to expose me to a lot of the music and culture that serve as inspiration for this album.” In honoring the pioneers and contributors of Black dance music, West African Afrobeats, and South African gqom, she collaborated with talented black musicians such as Jamaican-American rapper BEAM, Nigerian singer Tems, Grace Jones, icon of the Studio 54 disco scene in New York City, American singer-songwriter The-Dream, and American hip hop and R&B producer No I.D, to name a few.

Despite the album’s incredible reception, fans have criticized the singer for using an ableist slur in one of the tracks in the album. The word has been used as an offensive and derogatory term to people with disabilities, especially people with cerebral palsy. In light of this, Beyoncé’s team has confirmed the removal of the lyric from the track.

A grand display of cultural patronage

Renaissance is indicative of Beyoncé's vision of a reformed society where people are free to express themselves without fear of discrimination. Emanating this judgement-free space, she takes inspiration from the safe places of clubs created by and for Black women and queer people一Black Chicagoans, Detroiters, and New Yorkers who pioneered house and techno music, as well as the Queer ball culture that provided support to queer people of color.  Her remarkable vision and respect for these cultures lets her explore genres she hasn’t done before.

As she strays away from melancholic songs, she produces tracks that evoke sass, power, and pure confidence. Despite the change, she managed to stay true to her commitment in empowering Black and queer communities. Renaissance’s themes intertwine with the Black feminist and anti-discrimination motives embedded in her sixth studio album Lemonade.

Throughout her tracklist, she invites listeners to experience a historical timeline of iconic Black figures, by including a catalog of notable samples and cameos. In the opening track “I'M THAT GIRL,” the background chant takes inspiration from “Still Pimpin” by American rapper Tommy Wright III featuring Princess Loko and Mac T-Dog. The chart-topping single “BREAK MY SOUL” references the electronic beat of "Show Me Love (Stonebridge Mix)" by the singer-songwriter Robin S., as well as the energetic verses of the queer American rapper  Big Freedia’s "Explode.”

Even with Beyoncé’s ingenuity and powerful visionary statements, some tracks couldn’t surface as well as the others. The song “ENERGY” featuring BEAM ironically lacked energy as its duration, instrumental, and rap fell short. The repetitive rhythm of the percussion in “CHURCH GIRL,” which, similar to the former, could’ve had more kick and variety of sound. Still, these minor flaws barely diminish the stellar and captivating sound of the album.

The 16-track album showcased an upbeat and rhythmically-rich sound that complements the singer's extensive vocal abilities. A transcendent marriage happened between the singer’s vocal harmonies and the album’s heavy bass and electronic beats.

Once again, Beyoncé successfully asserted her title as one of the most legendary musicians of our time.

Overall, Beyoncé’s Renaissance is a phenomenal and powerful record that pays homage to the rich Black and queer culture. Her outpouring talent and respect to the pioneers behind her new sound gave her the opportunity to not only explore new genres, but bring a whole culture to life.

Strut your stuff on the dance floor with Renaissance, available now on Spotify and other streaming platforms.