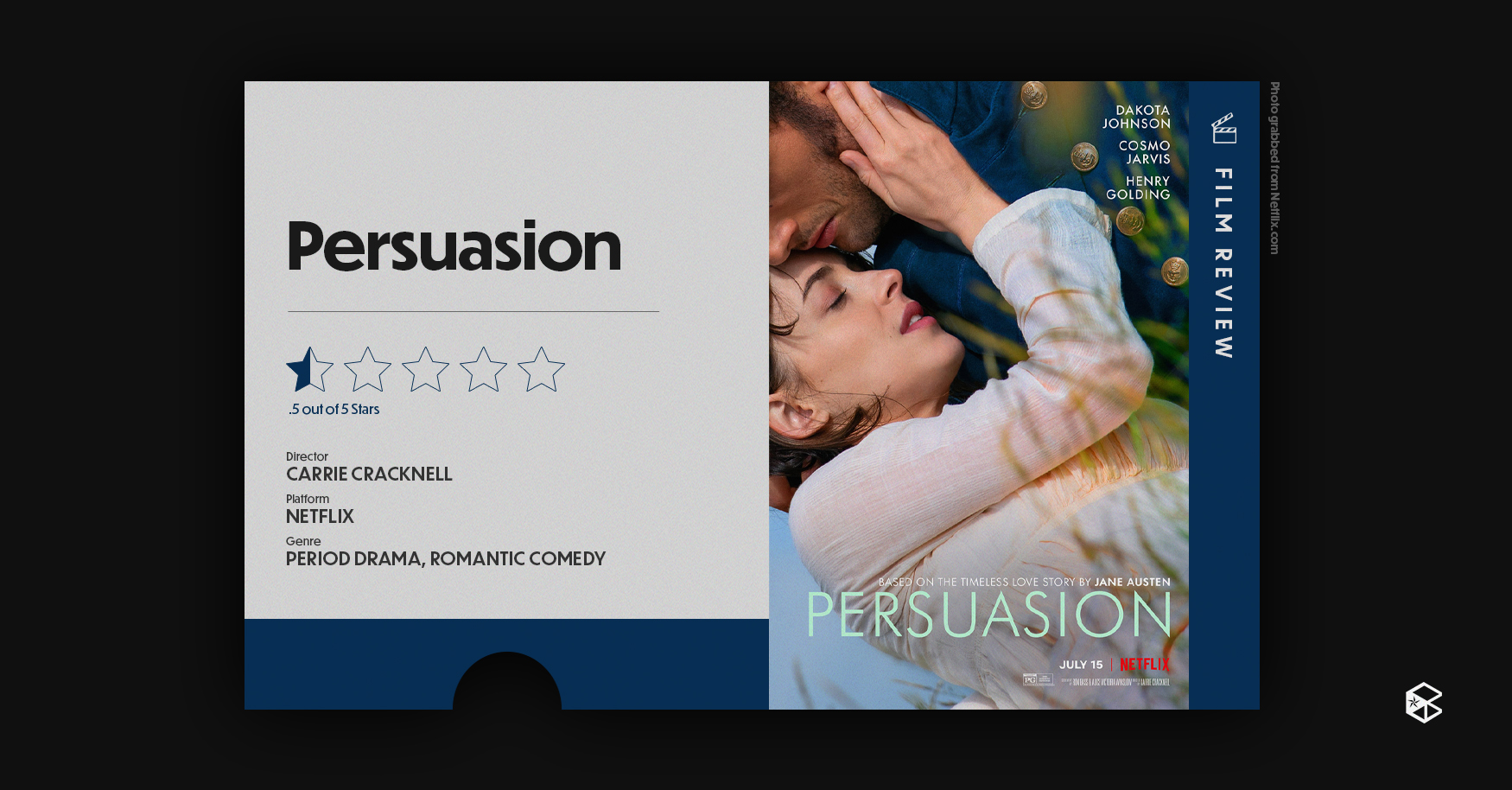 A new Jane Austen novel adaptation of “Persuasion” premiered on Netflix that leaves one to ponder—did we read the same book?

Based on the work of one of the most legendary English novelists in history, Jane Austen’s “Persuasion,” her most mature and melancholic novel, is all about second chances—a love once lost, found once again after years of longing. With that in mind, the film depicts an audacious take on the classic piece.

Right off the bat, the original novel and this film’s version of the main protagonist Anne Elliot (Dakota Johnson) contrast with one another. In the book, Anne is regarded with quiet dignity, timidness, repressed feelings, and an air of sadness to her. In the film, however, she is sassy and quirky with all her witty quips during awkward moments whilst breaking the fourth wall, much like Phoebe Waller-Bridge’s character in comedy-drama series “Fleabag.” This did nothing worthwhile, as Johnson’s portrayal of the role made Anne such an unlikeable character.

Seriously, did anybody read the book?

The book chronicles Anne’s and Captain Wentworth’s complicated love story. Both were engaged at young ages, however, Anne’s family had persuaded her to break off the engagement since Wentworth had no money. In a twist of fate, when Wentworth comes back eight years later, it is revealed that he has become wealthy due to his time working in the navy.

The film blatantly disregards the deep and painful longing between the two, clearly prioritizing all the unnecessary cheeky glances at the camera and forced dialogue.

Moreover, the film is devoid of Austen’s beautiful prose. Toying between the lines of modern and the Regency English way of speaking, the characters speak as if they’re people in the present, outright mocking the language of Regency Britain. With the outrageous lines of: “Daddy’s broke princess. Playtime’s over,” “Because he’s a ten, I never trust a ten,” and “Now we're strangers. Worse than strangers, we’re exes,” it is a tragedy to see the carefully crafted words of Austen be summarized into cheap, meme-worthy punch lines.

Biting off more that what you can chew

The film feels like walking on a middle of a long rope bridge personified: rocky and agitating. Stuck in the middle of being “modern” and “period” with the additional awkward-timed fourth wall breaks, the story tends to be insincere and scattered that leaves audiences confused and frustrated.

It is an incredibly difficult feat to create an adaptation that is both modern and faithful to the original work, and this piece is just a reminder of that. The overzealousness to zhuzh up and comedize one of  Austen’s gentler pieces leads to an unfunny and agonizing 109-minute film.

There is nothing wrong with modernizing classical pieces. Successful adaptations of Austen’s work have been produced over the years, such as Clueless, a modern classic loosely based on “Emma,” and Bridget Jones’s Diary and Youtube vlog-series The Lizzie Bennet Diaries, both based on “Pride and Prejudice.”

Consequently, what these adaptations have in common is a respect to the original work and a direct and coherent time, setting, and specific element in the plot that provides a fresh take—something that this recent adaptation lacks.

The film clearly tried to be many things all at once, yet failed to leave much of an impact. It’s a subpar adaptation that fails to capture the essence of Austen’s work, which is quite unfortunate for Austen's devoted fans. The one good thing that came out of this film is that it compels you to pick up the original book and appreciate Austen's beautiful and heartfelt story about second chances in love.

If you’re trifle disguised and setting yourself for disappointment, Persuasion is currently streaming  on Netflix.