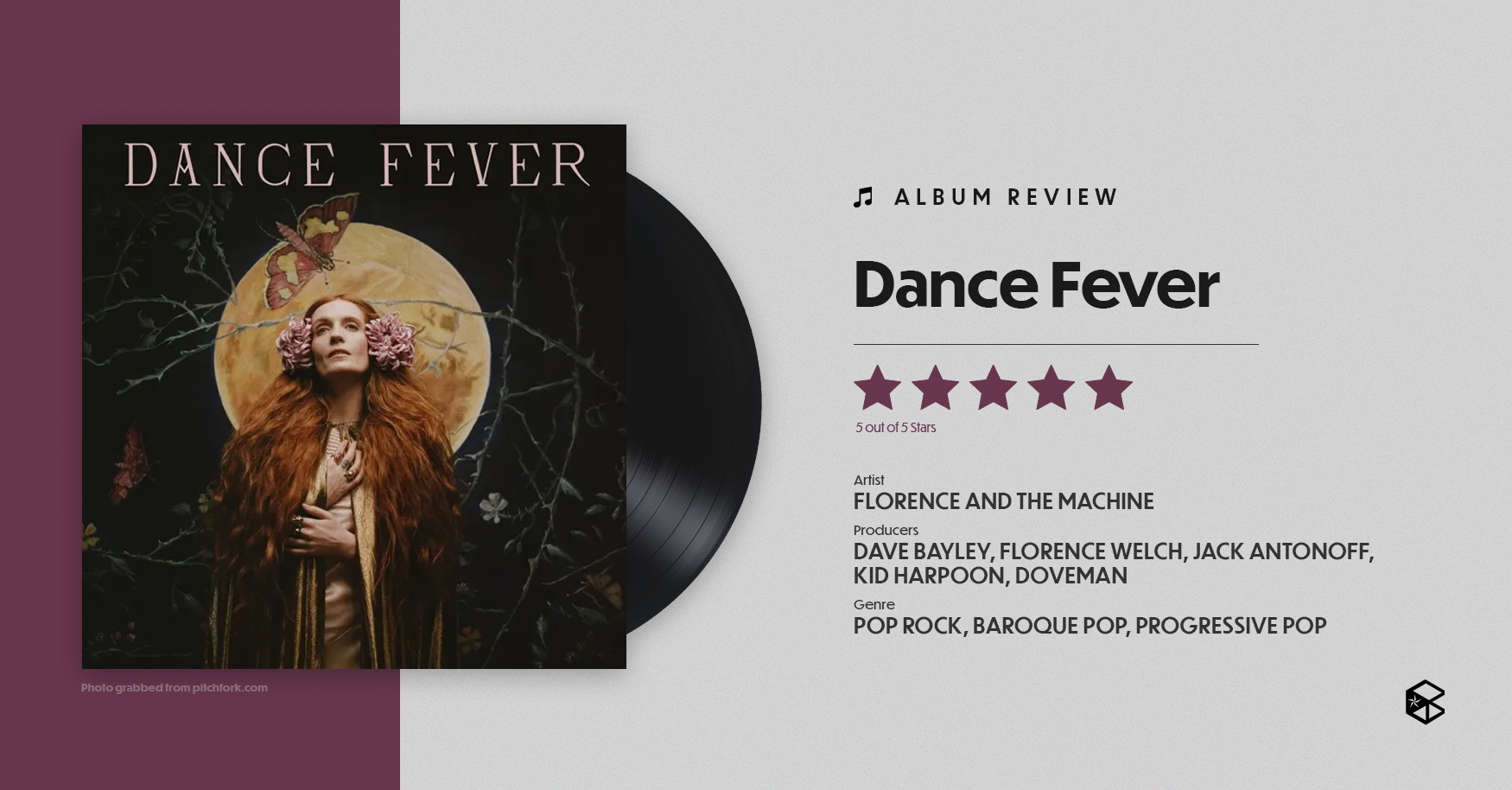 Well, did you miss Florence and the Machine? Dance your tragedies away with their newest renaissance-style, horror, and maximalist album.


Inspired by the concept of “Choreomania,” the so-called “dance-plague” of the 15th century wherein people were compelled to dance until extreme exhaustion or literal death stops them, vocalist Florence Welch became obsessed with this idea of catharsis and finding beauty in a series of agonizing madness.

The band started recording the album in March 2020, but production was halted and almost shut down due to the growing COVID-19 cases and lockdowns. Retrying, they recorded the rest of the album all throughout the pandemic which gave it its frantic, erratic, and emotional energy.

The record mirrors feelings of loneliness and grief that people have felt during the pandemic. Described as a “‘be careful of what you wish for” fable, the 47-minute album depicts concepts of survival amidst tragedy, questioning the world, and putting into perspective one’s morality.

A golden heart and a golden voice

In an interview with Apple Music, Welch shared she thought that the chaos of life and drinking, as well as everything going on in the world, fueled her creativity. Having been sober for years, Welch discovered a newfound cutting clarity that is evident in her lyrical prowess this time around.

Torn between conflicting priorities, the album’s first released single “King” describes Welch’s frustration over societal gender roles一choosing either domesticity and having artistic pursuits. Repeating ”I am no mother, I am no bride, I am king” throughout and just screaming in the middle of the song, she ignores these ridiculous expectations and holds her ground.

With a career of well over 15 years and counting, Welch isn’t afraid to share her personal life and career struggles through music. In the second single “Heaven is Here,” she describes how her music and personal life are suffocating her: “And еvery song I wrote became an escape rope tied around my neck to pull me up to heaven.”

Released last March 10, the “My Love” music video directed by Autumn de Wilde (Emma.), American photographer and filmmaker, brings the darkness behind its lyrics into this grand, glamorous, and danceable production. “So tell me where to put my love, do I wait for time to do what it does? I don't know where to put my love.”

Moreover, starring Welch as herself and English actor Bill Nighy as her anxiety personified, the comical and well-choreographed music video of the band’s latest single “Free” hides a sad narrative behind an upbeat rhythm that tackles her own mental health problems.

Making it to Graceland

An amalgamation of the past four albums; From Lungs (2009), Ceremonials (2011), How Big, How Blue, How Beautiful (2015), and High as Hope (2018)一the band’s fifth album is an ode to Florence and the Machine’s old gritty, punk, and anthemic roots, whilst adding an air of maturity and lyrical precision.

An artist through and through, Welch's musical brilliance stands out as vulnerability, eariness, and comfort are felt as she plays with her artistic choices. In adding croaks, heavenly woes, unhinged howls, and switching from soprano to baritone vocals, listeners can’t help but be shocked and delighted. This is all thanks to her signature shaky singing style and ear-spitting high pitched screams throughout the record.

The album’s sound is lyrically and thematically cohesive; it brings a sense of grounding madness and magic—sounding entirely like the classic Florence and the Machine brand. But this time around, it’s more authentic and incredibly fresh.

Music is a spiritual experience. Florence and the Machine's Dance Fever is Welch’s way of understanding her relationship to herself, as a woman, as a musician, and as someone who’s actively dealing with the remnants of their traumas. All of which delivers a transcending and powerful record.

Wallow in self despair or dance it out with Florence and the Machine’s Dance Fever available now on various music streaming platforms.