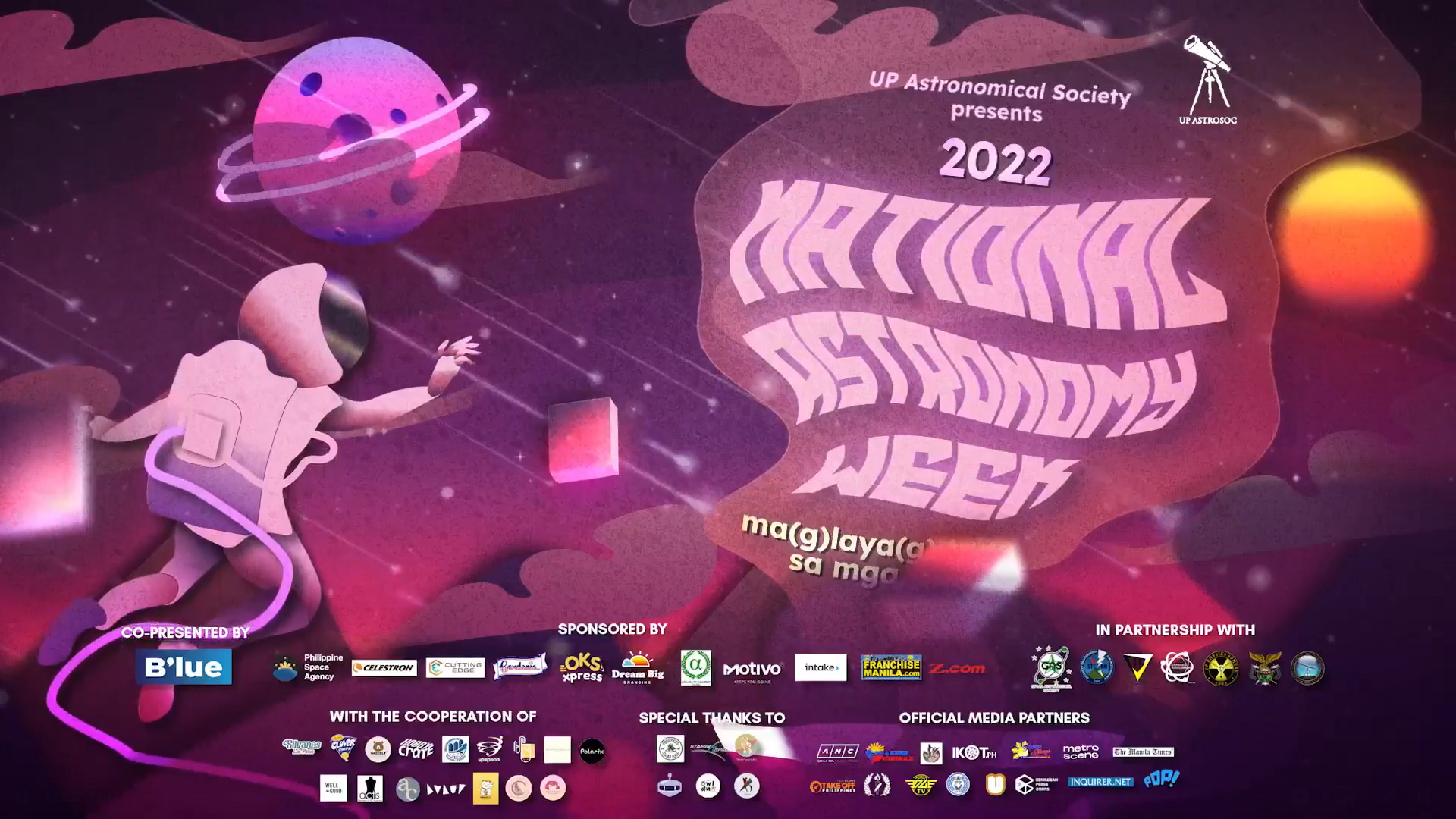 Photo Courtesy Of Up Astronomical Society.

UP AstroSoc’s National Astronomy Week 2022: Discovering what lies beyond the stars

After two weeks of exploring the cosmos with students, teachers, and astronomy enthusiasts, the University of the Philippines Astronomical Society (UP AstroSoc) capped off this year’s National Astronomy Week (NAW) with a big bang.

Following Big Bang: Astronomy Quiz Show wherein 30 teams of high school students competed in three rounds of astronomy-related questions to win a grand prize of ₱5,000, UP AstroSoc held its awarding ceremony on Mar. 5 to recognize the winners of the quiz show, as well as the other contests that took place from Feb. 21.

Opening the event with a speech of gratitude, Project Director Paul de Silva thanked the participants and partner organizations who took part in UP AstroSoc’s second virtual NAW celebration, sharing that “for the second year that we are celebrating NAW virtually, our organization continues to find ways to bring astronomy to students and the general public through events that enhance astronomical knowledge and expand astronomy awareness [...] Our hope is that by organizing events like this, we can promote greater interest and appreciation [for] astronomy in the cultural and societal evolution of humankind.”

Hosts by Jco Igdanes and Vinnie Vinculado commenced the awarding ceremony with an introduction of the speakers in Parallax: A Teacher’s Workshop which was an online webinar held on Feb. 26 with STAMINA4Space Program Leader Maricor Soriano, Philippine Space Agency (PhilSA) researcher Atchong Hilario, and PhilSA geologist James Refran who discussed the importance of space and sustainability.

Igdanes and Vinculado also presented the artists and scientific experts who served as judges for Star Trails: Astrophotography Contest and Artists’ Showcase, as well as Big Bang: Astronomy Quiz Show. Following the certificate of appreciation presentation for the judges was the announcement of winners for each contest who were rewarded with celestron binoculars, cash prizes, and vouchers from partner organizations.

The winners are as follows:

Facebook users who also participated in the daily online trivia game held on UP AstroSoc’s official Facebook page from Feb. 28 to Mar. 4 were also awarded in the ceremony. The following users were recognized:

To officially conclude this year’s NAW celebration, overall UP AstroSoc Coordinator Lerissah Lim gave her closing remarks wherein she expressed her gratitude for the students, teachers, and space enthusiasts who participated in the event.

“The outlook of our country for astronomy is looking great and we hope to continue working hand-in-hand with you as we broaden the awareness, interest, knowledge, and understanding of astronomy amongst students and the general public.”

National Astronomy Week is an annual event held by the UP Astronomical Society, a non-profit, non-political, non-partisan organization in the University of the Philippines-Diliman, to promote and improve science and astronomy awareness in the Philippines.

Tags: University of the Philippines Astronomical Society, #NAW2022
Tweets by TheBenildean
Printed from http://localhost:3000 on 30 November 2022