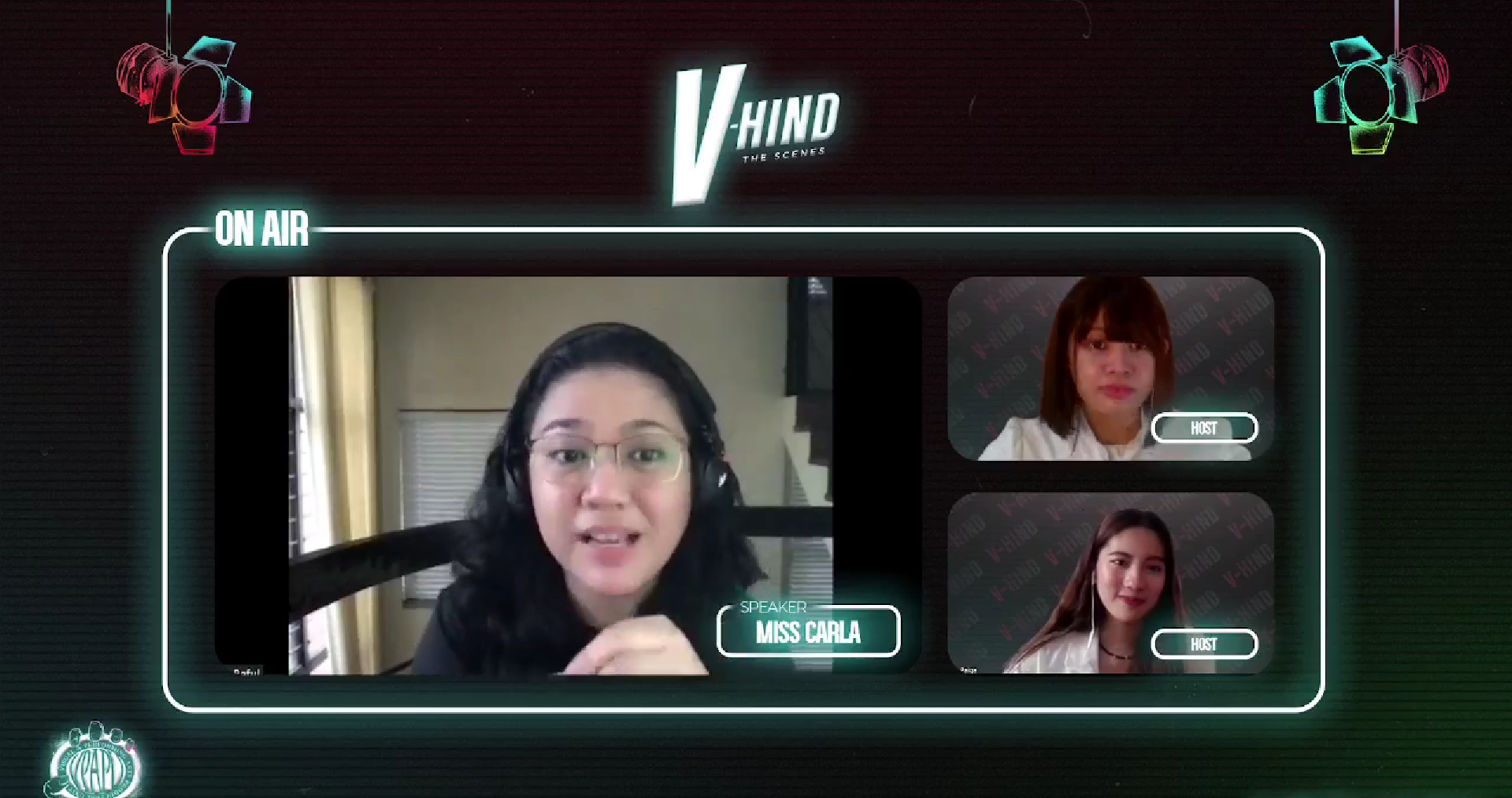 DLSU-D’s Visual & Performing Arts Production Unit (VPAPU) provided an inside look into the vast world of media production with their interactive webinar.

Open not only to the Lasallian community, the webinar event delved deep into the media production industry and a documentary that highlighted the people behind the scenes of VPAPU.

She has worked on screenplays and directed  2015 TV5 comedy series "Kano luvs Pinay,” the 2016 Filipino movie A Lotto Like Love, and the travel show “The Crawl,” with Filipino actor and producer Piolo Pascual. Currently, she teaches film at the Meridian International College (MINT) and is a producer of the podcast “It’s an Adult Thing.”

Ms. Baful shared her insights about the facts and fictions in the media production industry.

In the digital age, people in the media industry are the ones who are usually in the limelight. Ms. Baful stated that with the increasing numbers of influencers, the pandemic has become the golden age of podcasting. She also noted how the film industry doesn't have to truly depend on physical cinemas, thanks to streaming platforms such as Netflix and iFlix in the country.

These are great platforms for those in front of the camera. However, Ms. Baful stated audiences will mostly remember the actors and actresses who appear on screen, and not really the crew behind the scenes such as the production designers, writers, and the like.

“If you’re working behind the scenes, don’t expect na makilala kayo at matatandaan kayo ng public. The best hope we can have is makilala tayo within the industry, as people na okay makatrabaho at saka maasahan. But ‘yung maging household name tayo, kahit na Hamilton pa ‘yan, kahit Game of Thrones pa ‘yan. [...] You’re never gonna be as popular as those on cam,” she said, reminding the audience to manage one’s expectations if working behind the scenes.

As stated, fame isn’t guaranteed. But what’s the point of production if you won’t be as popular as the actors and actresses? Ms. Baful explained that one should truly know one’s purpose in life. As long as you have your “why,” no matter how simple it is, it’ll still be important, regardless of the lack of fame and recognition.

To drive her point home, she also shared a quote from Harry S. Truman, the 33rd President of the United States, “It is amazing what you can accomplish if you don’t care who gets the credit.”

Tight deadlines will always be a constant, especially in the broadcasting industry. Having experienced working in various industries, 24-hour pre-pandemic shoots are also very common. Excluding the meal times and travel times, this means that shoots can even exceed more than 24 hours.

Low pay adds more to the level of stress the production people experience. To make matters worse, multi-roles for one person and for one pay can still happen. Ms. Baful cited this as very stressful and exhausting for people in the industry. However, this toxic work environment shouldn’t be acceptable.

To contrast this, Ms. Baful shared an experience in the last production house she worked in, wherein she experienced culture shock in a positive way. The shooting hours were made efficient and they weren’t forced to work 24 hours a day. Furthermore, production practice during the pandemic has also significantly improved, and it’s definitely possible to have a more ethical practice when it comes to these working conditions.

Moving over to the creative aspect, the production industry is an amazing outlet for creative ideas. However, there are conditions. According to Ms. Baful, it’s not enough to have a brilliant idea, you need to have a supportive team that will give you a chance and trust you. After all, it’s a team effort.

“Talent is not enough. Mas importante ‘yung team na tutulong sa’yo,” she emphasized. You will also need ample time to develop and execute your idea, as it won’t be easy getting your concept and idea off the ground. It takes patience to have your idea get into the final stages of production. She also highlighted the importance of budget as a key foundation in any production.

Ms. Baful cited Murphy’s Law as an example, which states that “anything that can go wrong, will go wrong.” This isn’t about not being pessimistic, but rather, it embraces reality. One shouldn’t strive for perfection in the production industry–what’s more important is to become adaptable to any challenges and difficulties.

In doing so, one should keep in mind the pre-mortem managerial strategy which highlights the possible problem, how to prevent the problem, and finding a solution to the problem.

A healthy team culture is a make or break field, while another is a type of project that can easily drain and impact the people working on it. Ms. Baful shared she knew people who needed to take a mental and physical break from working on a documentary project that “exposed the dark and filthy parts of reality” because it was too heavy.

Having to go through obstacles in a project is inevitable, but a healthy team culture makes the struggle worthwhile and memorable.

Ms. Baful ended her presentation by going back to how to find one’s purpose in life. She summarized it simply: Don’t ask yourself what you want to be, ask yourself what’s the problem you wish to solve. Then, use your talents to reach your goal.

After Ms. Baful’s webinar talk, VPAPU showcased a documentary that chronicled the journey of the various hard working members of the unit.

After the webinar documentary, the event formally came to a close with closing remarks from Gab Sullano, “V-Hind the Scenes” Assistant Project Head.

“In the making of this event, we were hoping to reach our creative aspirants and enlighten them about the wonders backstage, as well as the personal struggles that even professionals face in the industry. The amount of time, passion and effort that is put into a single production is truly commendable [...] We can only wish that this event inspires our future creatives, to hone our skills and bring our best craft on stage with confidence,” he concluded.