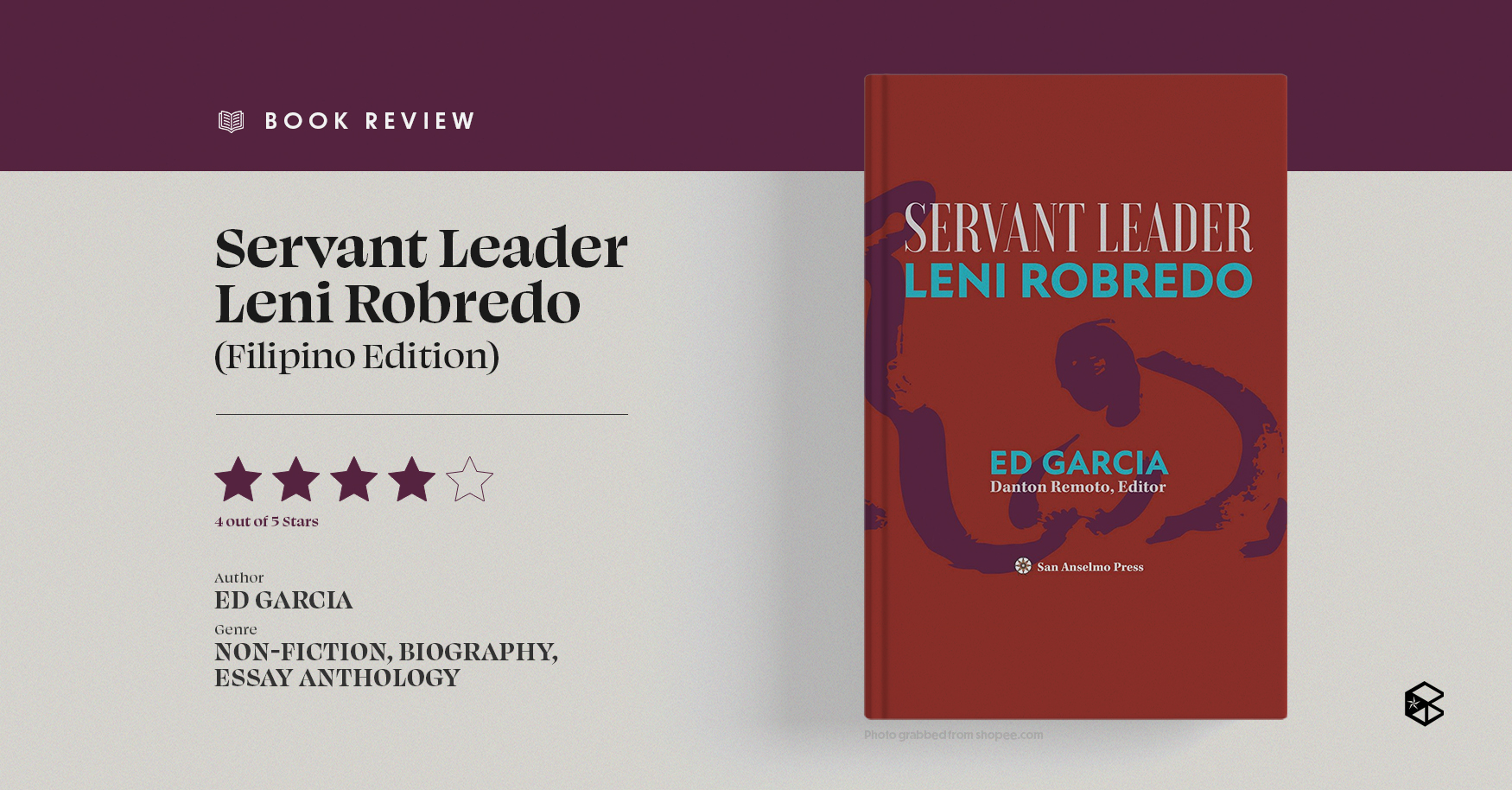 Change requires unshackling the barriers of the mind.

Deeply insightful whilst executed simplistically, Ed Garcia masterfully carves the depiction of aspiring presidential candidate Leni Robredo’s life, experience, and advocacy. Published in 2021, Servant Leader Leni Robredo is an ideal companion for citizens and voters in the current 2022 Philippine election campaign as it is illuminating.

As a contributor in formulating the 1987 Philippine Constitution and publishing numerous literary works with genres ranging from fiction to social politics, Garcia has established his name among the nation as an activist and a pioneering researcher. He also taught political science at the University of the Philippines Diliman (UPD) during Robredo’s education. She even expressed that Garcia was her favorite professor.

The biography is divided into three parts: Robredo’s early career leading up to the Vice Presidency, her limited time as the “drug czar,” and her career timeline. The essays compiled date as far back as 2013 up to 2020. Moreover, the Filipino edition of the biography also includes articles about the late President Benigno “Noynoy” Aquino III.

During the 1986 People Power Revolution, Robredo, a student from UPD, was already an activist who fought to eradicate the Marcos’ regime's long-term tyranny. At that point, she ignited her passion for public service in the following years. Leni and her late husband, Jesse Robredo, were known for their Tsinelas leadership as they conducted humanitarian aid in rural communities while wearing slippers as a symbol of their simplicity and empathy. Together, both believed in the essence of their acts as “pamumuno mula sa ilalim,” as they were able to establish the necessities of the impoverished—Naga City thrived under the Robredo governance.

The same advocacy could be attested during her period as congresswoman since Robredo authored several bills like the Comprehensive Anti-Discrimination Bill and co-authored in some such as the Anti-Dynasty Bill. As of 2021 and as the sitting Vice President, Leni’s Angat Buhay Program has aided more than 321,000 families, all while being one of the leading figures in COVID-19 response, as Garcia mentioned.

Non-fiction literature is known for its objectivity and discreteness; it is rare to find a piece that could convey heartfelt emotion simultaneously, but this biography is able to accomplish that feat. Like in any plot, the Robredo family faced a tragedy in 2012 when the late Jesse Robredo’s aircraft crashed into the sea near Masbate Island. Leni herself gave an intricate account of her late husband’s corpse, which is wholly riveting. Despite having multiple authors, the writings in this biography boast a multitude of emotions from grief to passion and love to determination—there is barely a dull moment.

The similarity in multiplicity.

An edge of the biography is that it provides multiple accounts of Leni from different individuals, yet all narratives complement one another. Through such execution, it reduced bias and subjectivity. Moreover, the authors were credible in providing an account as they personally knew Robredo. For instance, there were essays from Bam Aquino, Undersecretary Philip Dy, Gay Ace Domingo, and more. Leni’s daughters, Aika and Tricia, also had pieces on Leni as a mother. The biography even went as far as citing historical references to compare to contemporary Philippine issues.

Multiple themes also arose from the biography that refined it into a well-rounded read. There were topics on poverty, war on drugs, the Marcos regime, the stench of Filipino politics, the COVID-19 pandemic, biblical references, and female empowerment.

Throughout the biography, there are lessons and advice that may engross readers in choosing the most suitable candidates for positions in the Philippine government. There are essays on the qualities of a leader, powerplay in Philippine politics, necessities of the nation, and more.

As citizens who seek change, it is within our power to optimize factual information against disinformation and to put logic above prejudice—especially during elections.

You may grab a copy of Servant Leader Leni Robredo by Ed Garcia on Lazada and Shopee.

Tags: LITRAIL
Tweets by TheBenildean
Printed from http://localhost:3000 on 4 February 2023