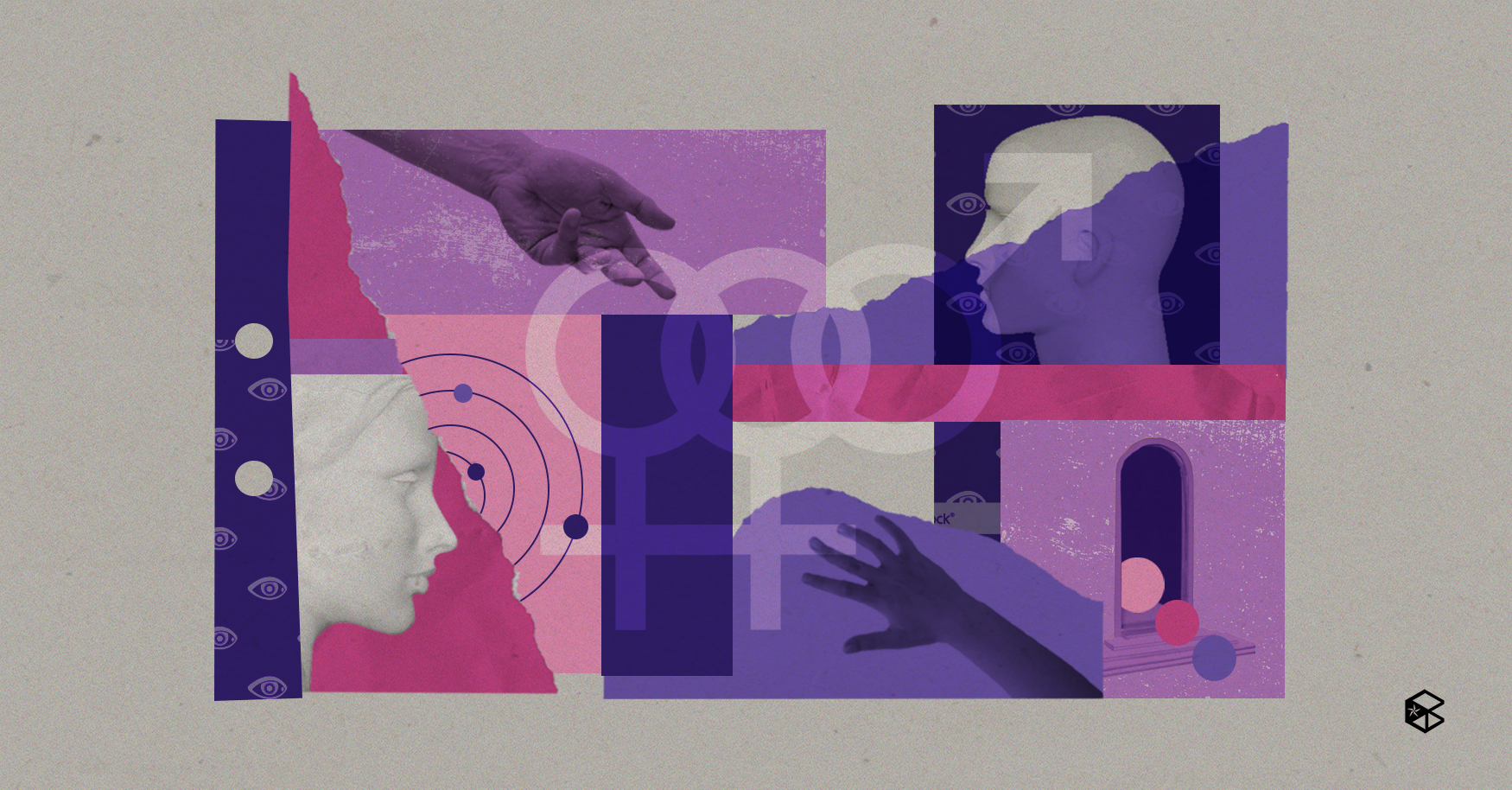 We are who we are: A conversation with bisexual Benildeans

In celebration of Bi Visibility Day, let’s sit down with three bisexual Benildeans and listen to their unique stories.

Celebrated annually every Sept. 23 since 1999, Bi Visibility Day recognizes the rich history of the bisexual community. From celebrating their individuality and debunking misconceptions, these Benildeans showcase what makes bisexuality colorful and something to be proud of.

“We don't discriminate or belittle every part of the rainbow and that is exactly why I love being a part of this family. We respect each and every one’s feelings.”

“In our generation sexuality is a very important yet sensitive attribute to our individuality. Thus, it represents who we identify as,” ID 118 Digital Filmmaking student Chessy Fernandez shared in an interview with The Benildean.

Chessy isn’t completely sure about her sexuality as she still tries to figure out what she really identifies as. “But i'm slowly learning and educating myself with these terms and said label and as of now I identify as a bisexual woman,” she stated.

Coming from an all-girls school, Chessy has heard cliche misconceptions about her sexuality. Encountering comments in the form of “not being able to choose” and “exploring both worlds” to “she’s faking it because it’s a trend” was agonizing. “At some point it got to me and made me think about whether or not I was faking being bisexual and just wanted to fit in because that’s the norm in an all-girls school,” she added. “But as I grew older and learned a bit more about myself, I didn’t care about their comments as much as I used to.”

Moreover, coming out wasn’t the easiest experience, according to Chessy, who came out only to her mom back in 2016. “I come from a religious and conservative family and opening up to them that I like both genders wasn't pleasant at first. [My mom] thought it was just a phase and that I'd grow out of it so she was okay. But as time progressed, she would leave nasty remarks about my sexuality and it was hard to hear comments like that especially from someone you thought would support you on anything,” she stated.

But sure enough, the LGBTQIA+ community is a safe space and an accepting family for inclusion and appreciation. Chessy is proud to be part of a family where each and every one’s feelings are acknowledged, “I guess that’s why we are united and we represent and fight for our beliefs to be heard and understood by people [who] aren’t part of the community.”

On the other hand, being bisexual is judged prematurely for liking both genders, especially when dating more men after coming out. “We are presumed to be lying about our identity. For me, it’s biased and foul to assume sexuality based on their dating history and we should just let people love who they [want to] love,” she added. It’s always better to provide a supporting net for the person instead of feeding off negativity with unnecessary comments.

Chessy is loud and proud that being part of the LGBTQIA+ community isn’t always the easiest, especially when you’re surrounded by people who make it hard for you to express yourself, “But surround yourself with positive energy and a wonderful group of friends who will make you love yourself and [who] will help you spread the love you have to give regardless.”

In an interview with The Benildean, ID 119 Multimedia Arts student Angelo Villamar shared that being educated about the spectrum of the LGBTQIA+ community helped him in understanding his own preferences.

“I think that my peers also helped me in accepting myself because they have been so open to all of my changes during the time that I was still figuring out things,” Angelo said. He also cited relating to the definitions describing famous icons that have explained sexualities in social media.

“Some people think that people who are bisexual are using it as an excuse because they are still afraid of being gay or lesbian. Even most of my friends think the same way, so I’ll educate them the same way I was educated because they still may not have a full understanding of bisexual people.”

Angelo officially came out to his sister who’s open minded about the LGBTQIA+ community. His sister has always known that he wasn’t straight, especially since they have a close relationship. However, it’s quite difficult to come out to his parents because their words have a significant impact towards him. “Although, my sister and I have been slowly making them realize that being a part of the LGBTQIA+ community does not ruin a person’s morality.” But Angelo and his sister think that their parents know he’s not straight and are slowly accepting the fact that Angelo is bisexual.

On the other hand, he’s very open to his closest friends, because, after all, they have the same mindset and are part of a generation where being gay is normal.

Furthermore, being bisexual is defined as someone who could possibly like both men and women. But the LGBTQIA+ community is a spectrum after all and most people are still discovering new preferences. There are people who may be sexually attracted to men, but romantically attracted to women, or vice versa. “I think that we should not be restricted with these definitions to find where we truly belong,” he added.

“As a part of the LGBTQIA+ community in a very conservative and religious country, I would always get criticisms from people who would reference the Bible every time they [meet] me,” he added. “Personally, I have had friends or religious leaders tell me that God only made men for women and that what I am doing is sin. What I would do is take my stand, believe that even God can understand my situation, and try to understand where they are coming from.”

For Angelo, patience is his strongest suit in these situations.

For those who feel like time isn’t on their side, Angelo says that there is no need to rush in coming out, “Take your time and let no one misgender you because you know yourself best. We don’t need validation from other people than ourselves. Also, practice safe sex.”

“It is very important for society to understand that sexuality is not an absolute matter of black-and-white, as it has its own spectrum.”

Back in grade school, ID 119 Architecture student Kat Beltran shared in an interview with The Benildean that she studied in a co-ed environment and was able to experience interacting with both genders.

Having two brothers in the family, she was able to easily interact with another gender, “I would say I understand their behavior more than my female classmates. I wasn’t able to have a relationship back then, but to some degree I understood what it looked like. I have to admit that I was not really emotionally intelligent back then so I tried to understand relationships (platonic and romantic) in such a rational perspective.”

In high school, she was enrolled in a private school exclusively for girls and was able to explore a lot more on her sexuality being a very different culture. “At first, the idea of girl-to-girl was very unusual because of my traditional upbringing. In observing this girl-to-girl relationship, I found it very interesting and particularly natural. From then on, I understood that there is more to being attracted to someone,” she shared.

Kat has experienced various misconceptions and remarks along the way. For one, bisexuality is often taken as attraction to only the male and female genders. However, being bisexual does not necessarily mean we recognize only two genders. As people often get the idea that having a sole male or female relationship is not enough, bisexual people are seen as “greedy.” On the other hand, Kat also cites that bisexual people are often fetishized.

“In my own experience, whenever some people discover that I am bisexual, they take it as if I am easily attracted to them regardless of their gender. Some straight people I’ve met also subtly “teased” me about this as if it was entertaining to them,” she added.

Moreover, Kat has come out to friends, but not to her parents. She feels that they won’t understand, “or at the very least acknowledge the “modern” perspective of sexuality.” She doesn’t see herself coming out anytime soon, considering that her family is conservative, traditional and “very boomer.”

According to Kat, bisexual people are usually hidden in the LGBTQIA+ community and society, “I do think that most bisexual people have a hard time understanding and accepting their identity since it is socially stigmatized that an individual should have romantic and sexual attraction to one gender only. Monosexuality is more visible and accepted to society. I do not particularly have a very negative experience as a bisexual but it would be significant and inclusive to have proper representation for all communities within the spectrum,” she said.

Being bisexual is often misconstrued by society and frequently discriminated by both heterosexual and homosexual community because of the stigma for sexual preferences. An individual is expected to have a single sexual preference, be it the same or opposite sex, “but sexuality should not be constraint in a straight linear orientation.”

“To anyone who’s struggling with identity, it is alright to explore and be more. If you feel invalidated and isolated, remember that there are people willing to listen and accept,” she emphasized.