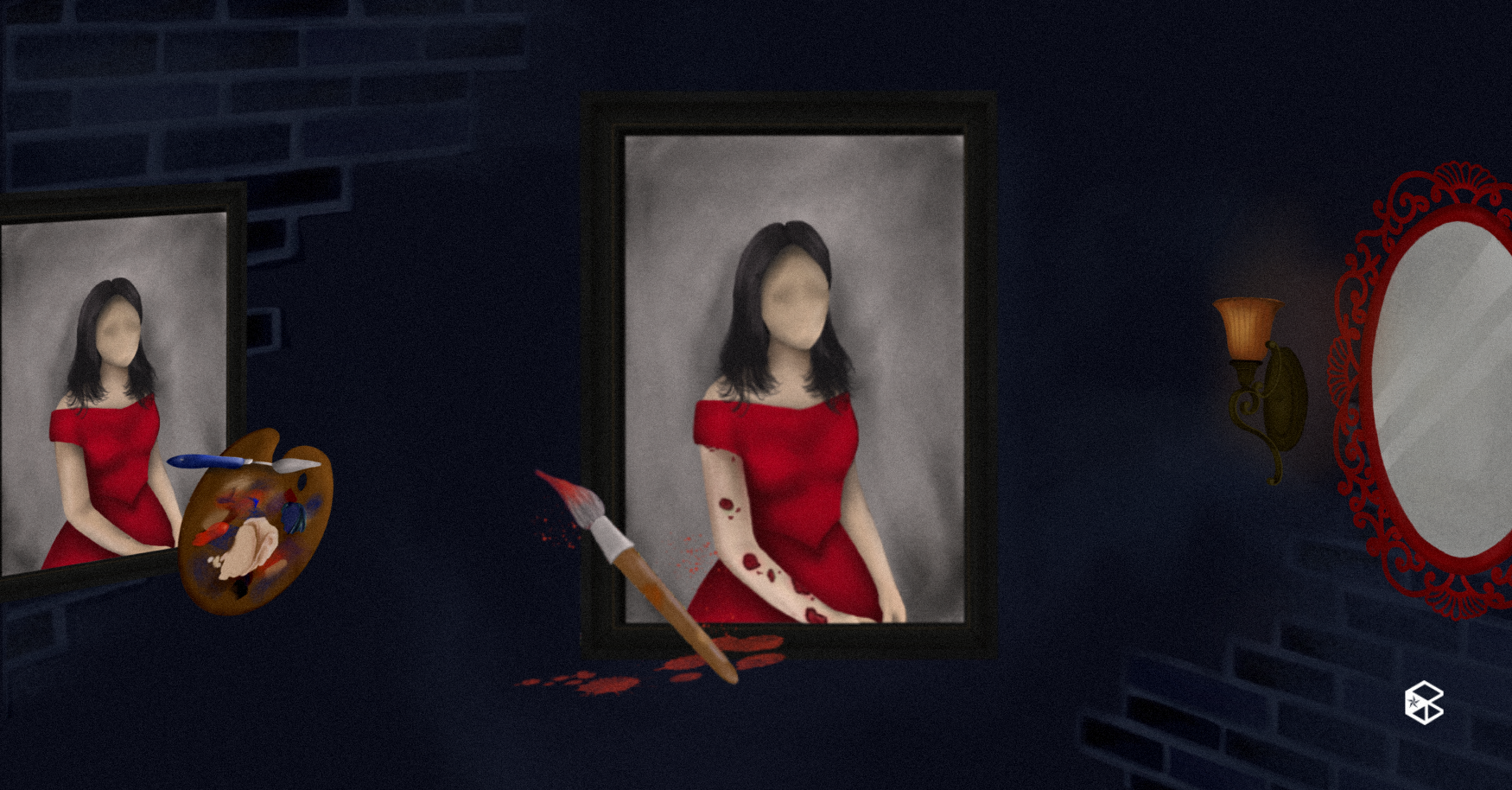 Portrait in the Dining Hall

The police station was freezing, I swear the metal interrogation table could’ve given me frostbite. The officer across from me shot a bone-chilling stare. He was studying me; my movements and mannerisms.

“You’re a painter, Mr. Lucia?” He leaned forward in his chair.

“Yes, I am.” I tried my best to remain calm, keeping my answers short and concise.

“What type of work do you usually do? Portraits, landscapes, murals?”

“Whatever work I can find usually.”

“Oh, my bad,” he leaned back to grab a file, “I’m not familiar with art, so tell me...” Flipping open the folder, pictures of Ms. France’s portrait spilled out, but something was off… her face was… decaying. “Do you normally use human skin in your portraits?”

Ms. Nicole France and I had first met in the dining hall of her estate two weeks prior. Her blue eyes glistened like soft moonlight, her ebony hair resting perfectly upon her shoulders, and her pale skin…the word flawless felt inadequate.

“I’m familiar with your work, Mr. Fredrick Lucia,” she said in a calming tone, “You didn’t think I wouldn’t do my own homework, did you?”

“I only kid,” she giggled as she pulled out a check from her bag, “I’m prepared to offer you this amount, for a portrait of myself.” I had never seen so many zeros in my life.

“That doesn’t explain anything,” the officer retorted.

“What was I supposed to explain?” I asked.

“Why you broke into her home? Why we found you in that warehouse covered in—”

“I’m getting there… obviously, this was before it happened”

Days after, Ms. France vanished in a suspected kidnapping, only for investigators to find female bones matching her description in her basement furnace a few hours later. I drove over to her estate with the portrait as soon as I heard, insisting on not cashing the check, but the maid urged that I do. She hung the portrait in that same dining hall Ms. France and I had first met.

“Pretty modest of you considering your criminal record,”  the officer flipped through his notepad.

My expression dropped. “That was a long time ago.”

“Is that why you broke in?” the officer pressed, “to “take back” what’s yours?”

I caught a glimpse of the dining hall in the news coverage. I stared closely hoping it was some visual error in the broadcast, but I knew I had to see the painting myself. I recall the piercing shatter of the glass when I broke through the window, the mansion left uninhabited. I turned a corner and looked up, admiring the work adorning the walls, Ms. France’s portrait as the centerpiece. Using my phone as a flashlight, I grabbed a chair and took a closer look at the canvas. The fabric was different, especially around her skin, you could see it was raised and the texture was… real. The technique was sloppy, I knew it wasn’t mine.

“And you didn’t think to call the police?”

“I had to find who stole my work and put this insult in its place.”

“And how did you accomplish that exactly?” the officer crossed his arms.

“Art forgery is a small but prideful world,” I said, leaning back in my chair, “some people can’t resist leaving a trademark.”

It’s almost impossible to spot unless you’re looking for it; a very specific set of brush strokes that only other forgers recognize. A triangle with one line extending out, placed on the bottom left corner of the canvas. This was Lux’s work.

“And Lux is Leo Choi, the owner of the warehouse.”

I nodded my head. In hindsight, maybe rushing over wasn’t the best plan of action. When I burst through the door, I gave him an earful. He flashed me a panic-stricken look before emptying a bucket of paint on me and running away. I heard a siren outside, that’s when the police arrested both of us.

I looked up. “How did you know I was there?”

“You tripped the silent alarm when you broke in, an officer trailed your car to the warehouse.”

I shook my head, “I’ll keep that in mind next time.”

“Only a figure of speech officer.”

The officer paused to answer his phone, pacing around the room before thanking the caller.

“I’ll have to confirm the other details but, looks like your story checks out. Mr. Choi confessed to everything, they found Ms. France alive and tied up next to your painting in the locked basement of the warehouse.”

He really thought he could do it...

The officer turned to open the door but quickly turned back.

I looked up at him with a deadpan stare, “Don’t ask me about the inner workings of disturbed men, officer, I wouldn’t provide much insight.”

He flashed a disheartened look and exited the room. At least Choi had the backbone to take the fall, he really thought he could imitate me… the amateur. You have to cut the canvas and sew the skin into it, he didn’t even bother using preservatives so it doesn’t rot. The only thing he managed to get right was my trademark.

Still, there’s one thing the officer said that bothers me.

If Ms. France really is still alive, whose bones did they find in her furnace?

This article is also published in The Benildean Volume 7 Issue No. 2: Restored.

Tags: Literary
Tweets by TheBenildean
Printed from http://localhost:3000 on 4 February 2023