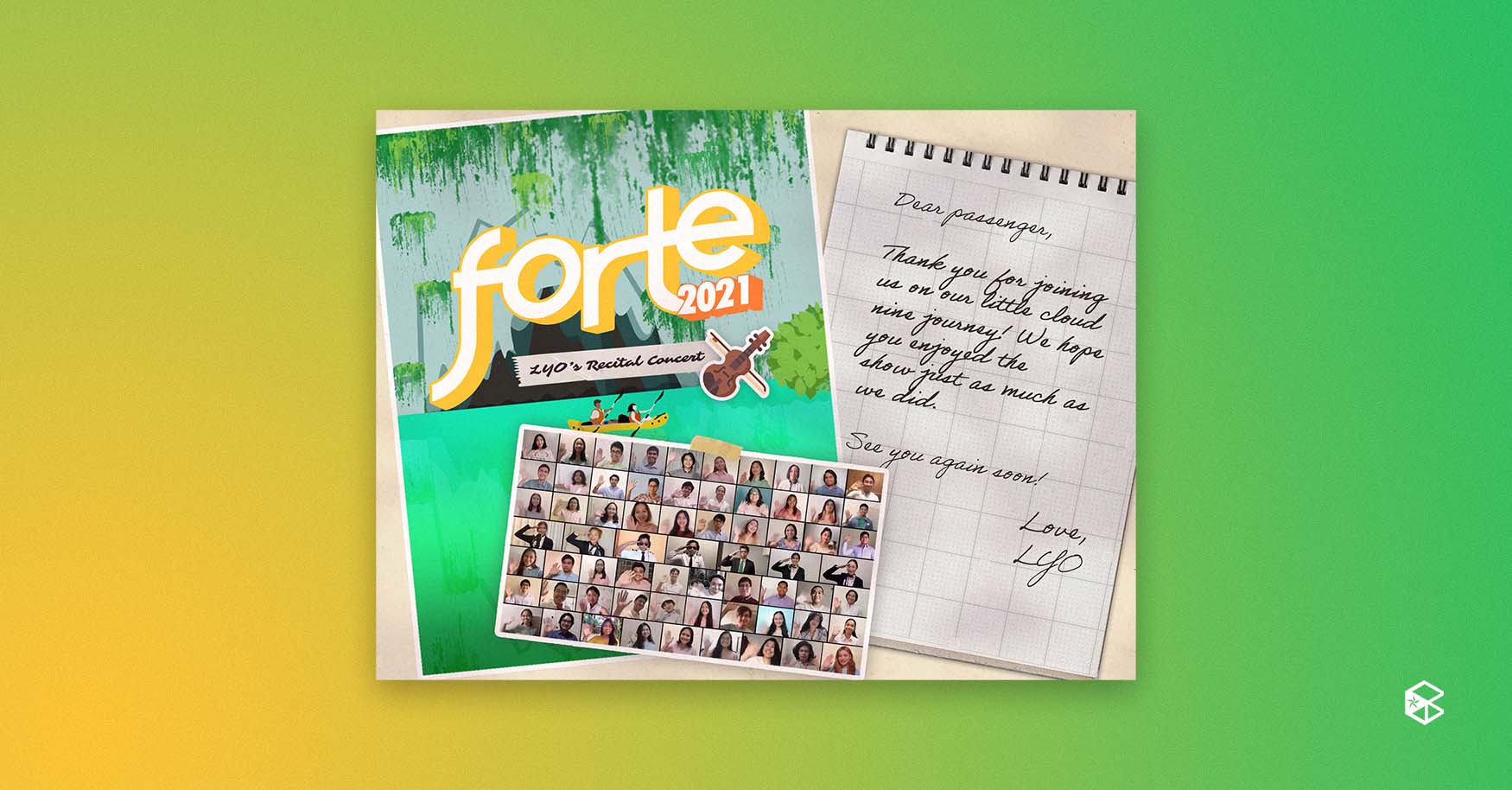 Lasallian Youth Orchestra’s Forte 2021: A musical journey through the clouds

From the classical masterpieces of composers such as Mozart and Rachmaninoff to the heartwarming music behind the Studio Ghibli films, and the iconic acoustics of Ben&Ben, audiences are taken on a trip through the skies with “Forte 2021: A Cloud Nine Musical Experience” via AnimoSpace, private Facebook Group, and YouTube Livestream.


“This year's ‘Forte’ was inspired by the idea of distance and how the smallest things, like a postcard or mail, could connect people and keep us close together,” Co-Project Head and Benilde ID 119 Arts Management student Happy de Mesa shared in an interview with The Benildean.

As the official orchestra of De La Salle University (DLSU), LYO’s Forte 2021 pulled all the stops to achieve an authentic feeling of being in-flight, opening with a greeting from the Airline Sol flight crew.

Piano soloist and DLSU ID 116 BS Electronics Engineering alumnus Bulaong described the experience of performing in Forte 2021, “I have come to see music not only as a means of self-expression, but as an opportunity for teamwork and communication.”

Following the performances of the soloists were the group recitalists which included Isaiah Perez, Adriel Amoguis, Ana Declaro, Gibson Diwa, and Mark Dizon who played the first piece titled “Kawaki wo Ameku” by Japanese singer-songwriter Minami.

The next performance consisted of performers Bulaong, Enzo Querol, Gibson Diwa, Nathaniel Guevarra, and Ana Declaro who made a rendition of the piece “Stay with Me” by the late Japanese composer and singer Miki Matsubara.

Another set of performances included a medley of SM Entertainment’s songs (EXO, Red Velvet, and NCT) and one with Ben&Ben.

“While the world is in quarantine, we wanted to use our talents and our passion for music to bring the different sounds of the world to our viewers' homes,” de Mesa added.

Achieving a concert of this caliber was no easy feat. Aside from performing online, the organization also had to carefully plan, edit, and audio mix the sequence of performances in a way that tells a cohesive story.

“We formed an in-house editing team and taught each other how to create professional-quality audio mixes and videos that tell stories, “ Bulaong quipped.

Despite the challenges faced, “Forte 2021: A Cloud Nine Musical Experience” gave audiences the adventure of a lifetime with its wide selection of music and passionate performances.

Look out for future LYO performances and stay updated through their Facebook page.