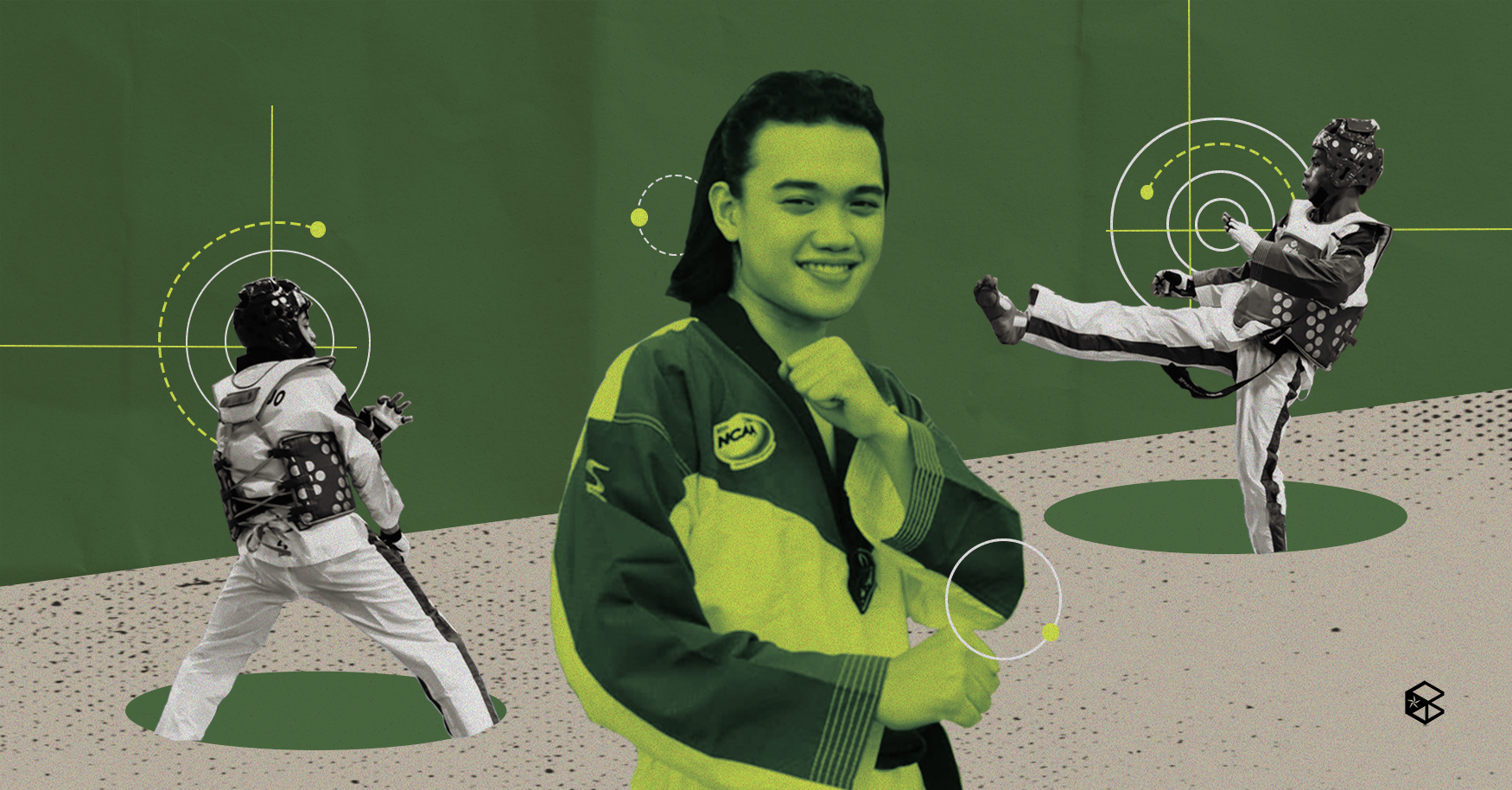 Laurence Scott Santiago, one of the key players in Benilde’s three-peat taekwondo crown, shares his road to the top.

Starting from the bottom

Santiago was only six years old when he played taekwondo for his PE class. Although this marked the start of his career, he admitted that how he started as an athlete did not “have much meaning” because he was not serious about it at his young age.

During those times, he considered it as a hobby and a school requirement. However, when he was able to form bonds with his teammates and friends as a kid, he continued to pursue the sport.

Santiago realized he was getting serious about taekwondo when he represented Muntinlupa Science High School in Division Meets and participated in NCR Palaro in Junior High School. With his hard work recognized, he understood that taekwondo is not just the “laro-laro” he thought of when he was younger.

Although he thinks that taekwondo is appreciated in the country, he noted that it does not have the same popularity as basketball and volleyball due to the accessibility of the sport. Unlike taekwondo, these sports can be played by anyone in the community. On the other hand, taekwondo needs precautions like wearing protective equipment to play the sport.

In an interview with The Benildean, he shared his thoughts on why these sports are more popular in the Philippine sports community.

To encourage other people to try the sport, he emphasized that “taekwondo kasi, it’s not just something to keep you healthy [or] to keep you fit. Siguro ‘yung value that you’ll learn, ‘yung obstacle na pagdadaanan mo, that will make you resilient sa true life experience.”

When he was recruited by Benilde, there were several challenges that came into his mind—being in a different environment with different people, adjusting his playing style in the new system, and his college life in general.

During his tenure in Colegio de San Juan de Letrán (CSJL) as a high school student, he admitted that everything was spoon fed to them—attending classes and training were just what they needed to do. However, everything was the opposite when he entered Benilde.

In addition, he admitted that playing in college has more maturity compared to high school. It was more of how to read the game, analyze it, and how to face the challenges in every match he’s in.

While training in a different system and with new teammates, he stated that time and effort were the factors that paved the way to address these challenges. Despite the number of podium finishes he bagged, the taekwondo athlete admitted that even until now, he is “still learning [and] still in the process na maging better athlete.”

During his three playing years in the College, Santiago’s most memorable experiences were the ones bigger than him. These were the championships where they sacrificed a lot of their time and skills, spontaneous hangouts with his colleagues, and the downfalls that molded him to the person he is now, such as losing in a competition.

Moreover, he stated that being a student-athlete taught him a fraction of the hardships in life.

Despite the pandemic, the NCAA continued to push Season 96 through online means. Although the taekwondo team only trained via Zoom and competed through a recorded video, the opening of a new season gave purpose to the athletes who didn’t get the chance to play for over a year. However, he prefers face-to-face taekwondo competitions over the virtual setup.

To top it all off, Santiago expressed his gratitude and appreciation for all the people who supported him in his journey.

“To the people na sumusuporta sa life ko, you can expect the same from me. I want to say na, I’m grateful; all of you have done more than what you think. [..] I also want to let you know that I treasure all of you and thank you for being good to me. Sa coaches ko, Sir Roberto Cruz, head coach, Sir Japoy Lizardo, Kuya Pogs Jazmines, thank you po sa tiwala.”