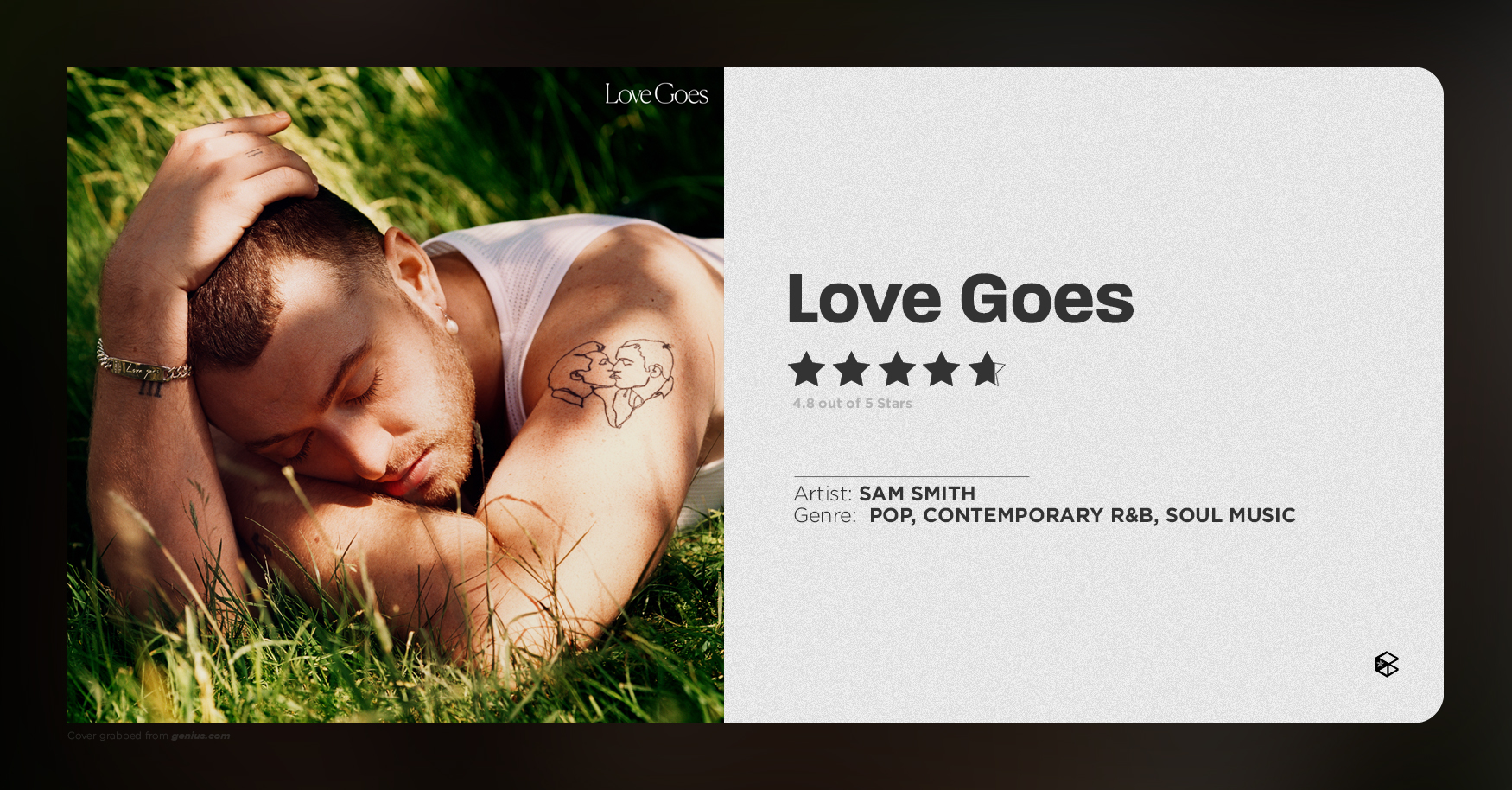 Sam Smith dives deeper into their musical artistry as they tell the significance of brief romances, self-forgiveness, and dancing until you love someone new.

Released on October 30,  Sam Smith’s “Love Goes” is the English singer-songwriter's first proper heartbreak album and third studio album. As Smith prefers to be called “They/Them,” reflected on their Instagram bio, they reveal that the newly released album is one full of liberty, retraction, and rediscovery.

Originally titled “To Die For,” the 17-track album, which has been in the works for over two years, was originally scheduled to be released in June 2020 but got delayed due to the COVID-19 pandemic.

Produced by Capitol Records, the album features rising artists from the global contemporary R&B scene with likes to Burna Boy and Labrinth, who feature in tracks “My Oasis” and song-turned album-title “Love Goes.” Other artists included in Smith’s album are American singers Normani, Demi Lovato, and Scottish producer and long-time friend Calvin Harris.

Expressing their relief to finally share their third album with fans, “I feel a bit emotional, even now just saying it, talking about this record,” Smith said in an interview with Apple Music’s Zane Lowe.

As a member of the LGBTQIA+ community, they mentioned, “the last two years have been a really, really mad time of experimentation, of finding myself with my gender expression, with so much that has happened in the last two years. It’s captured in this music.”

Known for their reputation of writing heartbreaking songs, the Grammy winner seeks to tell their long-awaiting fans that album three is their “first proper heartbreak album.”

“I’d say [this was] the first proper time I’ve actually been heartbroken,” as Smith continued the tormenting story which led to the birth of the latest album.

Each song, a separate story

“I hope you understand that I have to send you away,” is the first lyric heard in the piano introduction masterpiece of “Love Goes.” Featuring Labrinth, this song treads on harmonious piano keys and tunes as both artists make a perfect expression of symphony and heartbreak with the song’s main message—expressive of soul-unbinding and letting go.

In search of new lovers and the acceptance of somebody else, “Another One” speaks of brand new care and surrender for new partners. Told in a perspective of saying goodbye, Smith expresses letting go to let something new in. It’s all about the release and recapture in love with this song as it searches for new ones to love, and old ones to long.

Upbeat, unbothered, and uncontrollable—“Dance (‘Til You Love Someone Else)” is Smith’s celebratory message of love and life like a dance party. Embracing the inevitable impact of heartbreak, this song yearns to seek temporary lovers, almost promoting infidelity, for the thrill of it all because as they sing: “They say you can’t fall out of love ’til you love someone else ’til then.”

The last story, among many more, “For The Lover That I Lost” is reminiscent of the love that never thrived. Tragic losses reflected after broken hearts pay the cost of the feeling of no more. Visualizations of bygone nights and fantasies of coming back to mornings with the one is a faint message behind this song. This is the melodious farewell to the last lover.

As Smith’s newly released album expresses temporary affinities in an artistically musical thread, they push to understand the meaning of love and the possibility of reconnection with past lovers. Filled with raw, powerful lyrics “Love Goes” tells the story of lost love and the aftermath of pain and anguish.