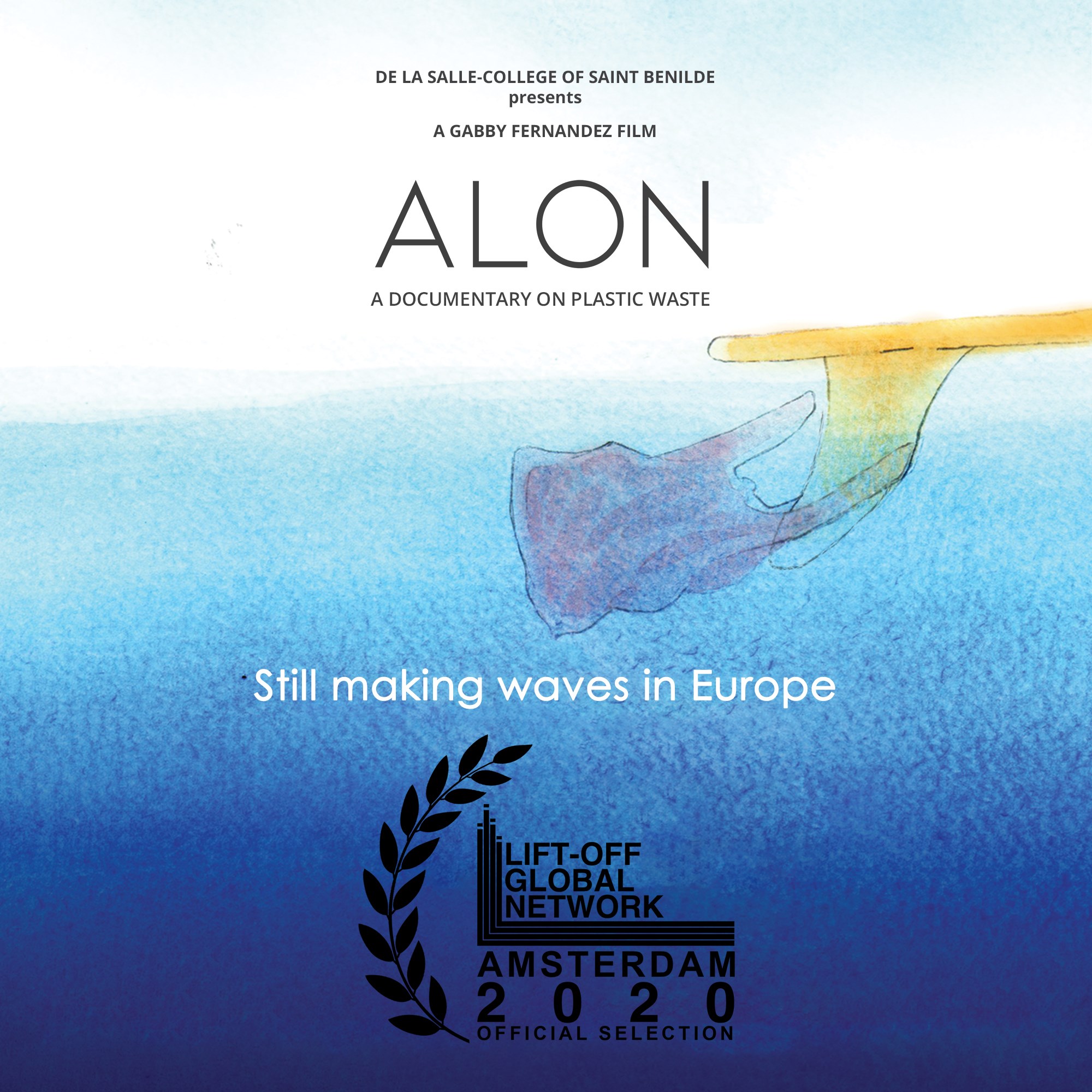 “ALON,” a documentary on plastic waste, represented the country at the Amsterdam Lift-Off Film Festival last Oct. 4 to 10.

Benilde-produced documentary “ALON,” written and directed by award-winning filmmaker Gabriel Fernandez, is officially selected as an entry in this year’s Amsterdam Lift-Off Film Festival 2020 in The Netherlands last Oct. 4 to 10.

Considered as one of the oldest film festivals in Amsterdam, Lift-Off Film Festival showcases filmmakers’ talents around the world through a week-long celebration with awards presented by the audience. This year, Amsterdam’s Lift-Off Global Network celebrated ALON in its selection as the award-winning documentary on plastic waste explored various procedures in reducing catastrophic effects by plastic waste on marine life, as told from different perspectives of surfing communities in the Philippines.

To the Audience, From the Director

As the film tackles issues of environmental collapse, Dutch audiences of the European film festival got the chance to share their outlook on mindless consumerism, single-use plastic products, and proper waste disposal through the film’s theme of conservation.

In an interview with The Benildean, Dir. Fernandez felt honored and proud as a part of the Filipino filmmaking community for presenting ALON in the Dutch film festival. He spoke about the documentary’s work being noticed, saying, “I felt proud to be representing the country, felt humbled by my work being noticed by an international panel from hundreds of movies that applied from across the globe.”

When asked about his message for the film’s purpose, he shared that the world needs to partake in saving the predicament in marine plastic pollution.

“The world must act together and we must act now,” he emphasized.

While in the long run, the director’s goal is to spread the message that single-use waste pollution and environmental decay is, at length, polluting humans.

“Plastic pollution is drowning our planet, it is in the air, in our rains, in our soil. Microplastic is literally killing us as it enters our food chain, poisoning us, seeping into our lungs, and causing all sorts of diseases and cancers,” he said, noting his passion for completely halting single-use plastic products and the preservation of the planet at large.

For a message to the Benildean-Lasallian community, he added, “Stay true to [the] Lasallian heritage and values, we must constantly lead the way in proper stewardship and conservation of the world’s natural resources.”

Meanwhile, aimed at educating the audience to reduce the latent motions of impulsive disposal, docufilm ALON’s advocacy against plastic waste and conservation of marine waters points out autonomous solutions to conservationist resolutions seeking to be applied by audiences interested in environmentalism.

In addition, ALON is still available for public viewing to support the School of Deaf Education and Applied Studies’ (SDEAS) #SignsForSigns. Watch it here.

ALON had an exhibit at the School of Design and Arts Campus in 2019.